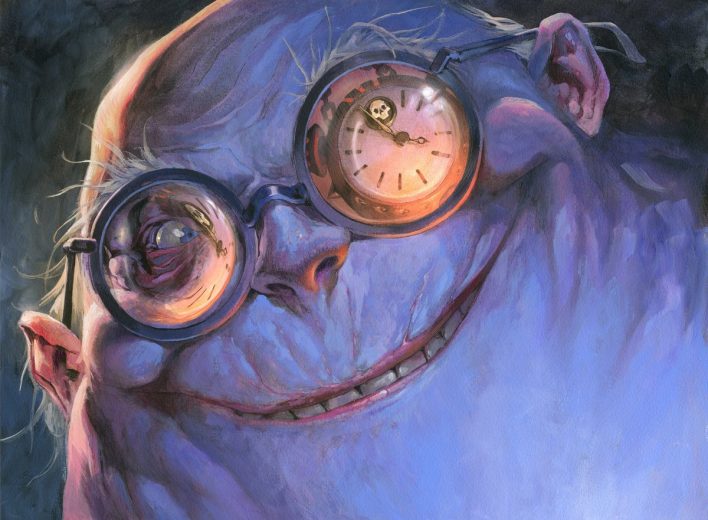 Hey y’all, out of my comfort zone doing an Un-Mander deck tech because I am the biggest fan of token decks you may ever meet, and this guy, The Big Idea is seriously the coolest commander from Unstable in my (correct) opinion. Let’s get a move on then! Yah boy, the big guy himself. I love rolling die, as a dungeon master, and I love tokens, and this guy is nothing but awesome. If you’re lucky, you can pay 4 mana for 6 tokens, or even 12 if you can activate the ability! This deck uses every die-rolling card I can find in un-sets, since they’re technically legal, and did my best to make it as non-degenerate as possible, basically the whole thing is tokens and ways to make Brainiacs better. Let’s go on! Purphoros, God of the Forge is a key creature, letting all your Brainiacs shock your opponents, imagine rolling a 12 and 24ing everyone at a table!

Razaketh, the Foulblooded helps turn the mana into value, finding the enchantments this deck loves and other finishers.

Snickering Squirrel gives us a good cheap way to get 7 tokens instead of 6, or make our 1 rolls a little less painful, as well as making some of our other die-rolling cards more playable. Goblin Tutor and Strategy, Schmategy give some nice versatile options for our die-rolls, including some fun options.

Torment of Hailfire is easily the most fun way to win, making everyone sac away their boards with loads of mana from enchantments later on. Krark’s Other Thumb is obvious, letting us get our big rolls more often when we need them, including our one 20 sided!

Steel Squirrel gives a nice little creature that boosts from our die-rolls, sadly not permanent but with all the die-rolling we do, it’ll be easy enough

Skullclamp is obvious, letting us draw 2 for 1 mana for every Brainiac

Panharmonicon is awesome because it lets us trigger things like Purphoros twice for every Brainiac, or our big hitting enchantments! Squirrel-Powered Scheme is priceless, it makes some rolls useless for things like Goblin Tutor but for The Big Idea and others, it’s amazing. Imagine this, Snickering Squirrel and the second ability on The Big Idea, we could get up to 17 tokens for 4 mana!

Mana Echoes and Death March let us win the game like crazy with big X spells, even rolling a whole lot of die with Steel Squirrel! Death March needs some care, lest we die to ourselves

Warstorm Surge lets us kill someone outright with the best mythic ever, Infinity Elemental

Shared Animosity is awesome when we aren’t winning with combos, but with huge brainiac tokens, making our lives a lot simpler than beating down with 1/1s

So, ready for the decklist? Here she is! Along with Contraptions for the one card in the whole deck I think that does it, but hey they’re fun too!

There’s my unmander deck tech everyone! If people are fans of this, I’ll keep up my own homebrew deck sharing, no real themes involved since I’m not that clever, but I build lots and lots of tribal decks so it should be nifty!