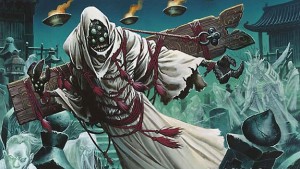 Apologies for the brief No-Cash Hiatus, I’ve been packing my life into boxes for the past week! To make up for it, I’ve decided to turn the jank up to 11 and break out possibly the most interesting mono-black commander in existence. Call it a Halloween Special. Clocking in at $49.45 we have the king of “Weenie Tribal”, Shirei, Shizo’s Caretaker:

Death by a thousand cuts is the name of the game here, since with only very few exceptions all of the creatures in the deck fit with Shirei’s theme of “1 or less power”. There’s also some exceptions to that rule but we can get to those. As such, let’s get going with the main meat of the deck, that being the things that interact with Shizo’s revival ability:

Abyssal Gatekeeper – When it dies, everyone loses a creature. The catch, of course, is that with this and most of your other creatures being 1 power or less chances are it’s coming back turn after turn.

Apprentice Necromancer – Revives a thing, if only for a turn. Or at least it would be if it weren’t for Shirei watching it die so it gets to come back, along with the necromancer.

Augur of Skulls – A free Mind Rot every turn sounds like an excellent idea to me.

Baleful Eidolon – Nothing like a good old rattlesnake effect, and this one keeps coming back when it dies, and can turn something else into a deathtouch guy too.

Basal Thrull – This is basically a Sol Ring when you have Shirei down right? No? Well it’s still pretty good.

Basilica Screecher – Lets you peck your opponents for a bit of extort damage at a time, while conveniently being within resurrect range for Shirei if your opponents get sick of him.

Blood Artist, Zulaport Cutthroat – Pretty much the same creature for the purposes of this deck, both strong win-conditions and both made significantly more resilient with the application of Shirei.

Bloodthrone Vampire – A sacrifice outlet to fuel all of our death-powered abilities (Such as the above) that happens to be 1 power. Also can provide a good bit of reach to finish of that one last pesky opponent.

Bogbrew Witch – No prizes for guessing two of the other cards in this deck. Conveniently, both she and her newt can both be resurrected by Shirei. More on this later.

Bone Shredder – Horror on a stick, that conveniently kills itself every upkeep to be resurrected by Shirei at the end of the turn.

Cadaver Imp – Lets us grab something that died when Shirei wasn’t around, so that they can die while Shirei is around. Several times, hopefully.

Carrion Feeder – Another low-power sacrifice outlet for the purpose of fuelling this deck’s various synergies. A bit harder to keep around with Shirei though since it’s power boost is permanent.

Doomed Dissenter – A 1/1 that dies into a 2/2. Normally fine, a bit nuts with Shirei, especially since with a sacrifice outlet you can do it each turn Shirei lives.

Festering Newt – -1/-1 is fine, but we have a Bogbrew Witch in this deck, we don’t have to settle for “Fine”. We get to start killing mid-power creatures on a pretty consistent basis once the engine is assembled. With additional benefits if you’re using the Bubbling Cauldron in the deck to power the engine.

Fume Spitter – Festering Newt, but better in a vacuum. It’s missing the Bogbrew Witch synergies but instead you get to permanently weaken things rather than the temporary -1/-1.

Graveblade Marauder – One of our primary win-conditions, he blocks pretty well as a 1/4 deathtouch and hits for considerably more than 1 when he gets in for a hit, and we have a lot of creatures – Since his ability doesn’t actually increase his power though he gets pretty strong with Shirei.

Guiltfeeder – Another one of our big win-conditions, dealing potentially a lot of damage per swing but without actually increasing his power.

Heap Doll – Counter target Reanimate is alright anyway, but with the magic of Shirei it becomes pretty heavily repeatable for next to no mana investment.

Hell’s Caretaker – Both a sac outlet and an insane value engine, letting you sacrifice a creature (To be resurrected by Shirei) while also resurrecting a creature that either is out of Shirei’s range or that died while Shirei wasn’t on-board.

Hope of Ghirapur – For those who read the entire no-cash focusing on this guy as commander, you’ll already have noticed that as long as Shirei survives and you can keep swinging out with this guy you can soft-lock someone out of their noncreature spells. It’s pretty filth.

Kheru Mind-Eater – This guy gives us a shot at dealing with problems we can’t really deal with in Mono-Black (See: Basically any noncreature permanent). It does this by stealing everyone else’s answers and letting us cast them.

Kiku, Night’s Flower – Repeatable removal on a creature that Shirei can revive. I can more than get behind this.

Liliana’s Shade – Makes sure we hit our land drops, and provides a pretty strong haymaker when we need it, while being in Shirei’s range when he’s not pumped.

Mindless Automaton – With Shirei around this guy just lets us draw an extra card each of our and our opponent’s turns. It’s pretty strong considering the budget.

Royal Assassin – Another repeatable source of removal that survives removal thanks to Shirei. Less Mana-Intensive than Kiku but only works on tapped creatures unfortunately. #VigilanceOP

Tattered Mummy – It dies, your opponents lose life, he comes back the next turn and you can do it again. It’s pretty alright considering that in a 4 player game that’s 8 damage to each opponent per go around the table as long as you can keep Shirei.

Viscera Seer – Another sac outlet that Shirei makes live forever too. It’s pretty great. Especially since it can sacrifice itself too.

Weaponcraft Enthusiast – If Shirei is out, this card actually reads “Make 2 servos on etb”, and with a sacrifice outlet as well you can do that on every person’s turn. That’s a lot of creatures.

Good lord that’s a lot of strong weenies. I suppose we should get on to the creatures in the deck that aren’t tiny huh?

Butcher of Malakir – You may have noticed that we want our creatures to die a lot. Butcher makes sure that everyone gets to join in on the death, whether they want to or not.

Gray Merchant of Asphodel – Gary is a big noncombat haymaker to close out the game, with a few ways to reanimate him in case he doesn’t get the job done the first time. This works because of how resilient Shirei makes the deck so there should be a lot of symbols on the board.

Grim Haruspex, Harvester of Souls, Smothering Abomination – All filling pretty much the same role here, allowing us to turn all of this death into even more card advantage.

Pawn of Ulamog, Sifter of Skulls – Gives us mana or board advantage whenever we go about our usual business of sacrificing half our board – Whichever we prefer.

We’ve also got some noncreature sacrifice outlets which is generally pretty useful, considering the main them of this deck is “Sacrifice all the things, but mostly the weenies”:

Bubbling Cauldron – If you’ve been reading up to now this should be no surprise since I already mentioned the newt and the witch.

Jar of Eyeballs – Granted you need to put some mana in to get the effect, but getting a Sleight of Hand‘s worth of digging every death is pretty strong.

Skullclamp – Pretty much a sac outlet that draws an absurd amount of cards in exchange for being only able to sacrifice small creatures.

Spawning Pit – Turns every two creatures sacrificed into a 2/2. In itself is fairly weak but since Shirei means we don’t actually lose the creature sacrificed (As long as it’s a 1/x) it’s a pretty strong amount of value.

Altar’s Reap – 2 mana draw 2 at instant speed as long as you’re willing to sacrifice a creature. And willing you should be so that you can reap the benefits.

High Market – A sac outlet attached to a land for the sake of resilience. The lifegain is marginal, but welcome.

Dictate of Erebos – A more resilient version of Butcher of Malakir, with the downside of not being able to swing for 5 in the air every turn. My opinion? Worth.

Reprocess – 4 mana is hefty, but the amount of cards you stand to draw in this deck from that effect is simply ridiculous. If you can steal a Laboratory Maniac you might even stand a decent chance of winning off of that effect if you have something like a Grim Haruspex on the board as well.

We’re also running a modest equipment suite, outside of the previously mentioned Skullclamp. Need to keep that commander alive somehow.

Hammer of Nazahn – Otherwise known as “Darksteel Plate but half the price”. The insta-equip effect isn’t entirely lost on us though.

Lashwrithe – Gives one of our creatures a massive power steroid, which is excellent when we only need to deal 21 commander damage to win right? And who expects that from Shirei? Nobody that’s who. Unless they also read this of course.

Mask of Avacyn – Gives Hexproof. And some stats, but really we’re playing this as another way to give Shirei Hexproof so he can’t be killed off by our opponent’s spot removal.

Whispersilk Cloak – Again, we’re really playing this for the Shroud but the unblockable is certainly not lost on us, especially in combination with Lashwrithe or Guiltfeeder.

Finally, here’s all of the deck’s “Glue”, the general value cards:

Bontu’s Monument – Makes our creatures cheaper while also giving us a bit of chip damage for playing our guys. Generally pretty good.

Tragic Slip – With all of the sac outlets in this deck, it’s rare this will be anything other than hard removal – including for indestructible creatures. Ever wanted to see Avacyn, Angel of Hope fall down some stairs and die? I got your fix right here.

Wake the Dead – Pretty much blanks any non-Overrun fuelled Alpha Strike while giving us a silly amount of value from everything dying again – Then potentially more if Shirei is on the board too to bring them back on a more permanent basis.

Bojuka Bog – Turns off an opposing graveyard deck for a few turns. It’s more than fine considering it’s a land.

Barter in Blood – Everybody sacrifices two creatures. The difference being that for us that’s usually a good thing.

Diabolic Tutor – 4 mana to cherry pick a card from the deck. No problems here.

Dread Return – Reanimate a creature, then renanimate another creature by sacrificing some other creatures. As has been stated many times, that’s barely even a cost for us.

Mutilate – Boardwipes, conveniently setting the power of each of our creatures to 0 as it does it. You may be thinking “But how does Shirei survive that?” The answer, dear reader, is Lashwrithe, since it will always be buffing the creature by the same amount this card nerfs.

Victimize – Turns one creature into two. It’s a pretty powerful card – Especially in a deck where the sacrifice is as much a feature as the reanimation.

And that, Ghouls and Ghosts, is the deck. There’s certainly some things that could be done to improve the deck though:

All of these cards provide a ridiculous amount of advantage to anyone with the creatures to fuel them. Good thing we do. Razaketh especially can make our plans go off without a hitch by finding every card we need whenever we need it. Smokestack and Contamination are ones I want to draw some extra attention to as well, pointing out they are very much some of those cards that certain tables might kill you on sight for. You were warned.

One of the things mono-black tends to be famed for is the mount of “Big Mana” effects it has. While a lot of these are creatures, there’s also a lot of good ones that aren’t. Phyrexian Tower especially should be good in this deck, given that it’s also a sacrifice outlet.