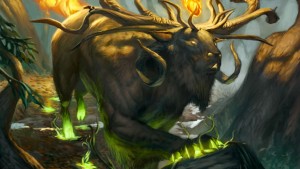 Normally, this is the time where I would showcase one of the new Ixalan commanders, but I thought I’d spice it up a little this time (Plus, good Tribal is kinda pricey) and focus on a mechanic instead. You may recall in my bit about Gishath in the Legendary Encounters article I mentioned another commander that might be good for a dino tribal deck due to their main mechanic, Enrage. That commander is stealing today’s spotlight – Clocking in at $48.22 we have Marath, Will of the Wild.

We’ve got tokens, we’ve got big stuff, we’ve got a lot of damage and Marath is just one big enabler. A lot of the triggers in this deck can be set of by a quick poke from Marath – Let’s dive on in to those shall we?

Bellowing Aegisaur – Whenever he eats a ping, all of our other creatures benefit. Conveniently, this includes Marath so you don’t go counter-negative when poking this dino.

Boros Reckoner, Spitemare – Effectively the same creature – When they eat a ping, they deal a ping. Ideally they’ll eat a lot more than a ping and you can drop some real damage on your opponents.

Broodhatch Nantuko – This is one of those you’ll want to pump a bit first before pinging but once you do it’s a veritable engine.

Deep-Slumber Titan – 7/7 for 4 seems strong, especially when we can wake it up pretty easily.

Fungusaur – One of the creatures that was errata’d to fit in the Dinosaur deck, this one even had Enrage before it was cool.

Hornet Nest – I can’t be the only one who remembers what a pain this was in Standard right? Well now we get to abuse the hell out of it again, but better.

Mirrorwood Treefolk – So while this doesn’t actually have Enrage, it’s certainly one we want to be hitting with our big-ticket damage spells to drop some burn across the table.

Protean Hydra – This thing basically has “Enrage – Get counters equal to the damage”. Just don’t accidentally kill it.

Ranging Raptors – All of your pings now have Rampant Growth stapled to them. I’m pretty okay with that.

Raptor Hatchling – Another one like Broodhatch Nantuko who needs some support to be truly silly but the fail case is significantly better here, getting a 3/3 instead of a 1/1.

Ravenous Daggertooth – It takes a ping, you gain some life. Seems pretty fine.

Saber Ants – Broodhatch Nuntuko but without the need for setup since it already has more than 1 toughness – And appropriately more mana.

Snapping Sailback – Gets bigger whenever he eats a ping. So it’s almost like he never ate the ping – except that he’s bigger.

Sprouting Phytohydra – When we have some anthems down this guy becomes a full-on wincondition, with an infinite combo I’m going to talk about a little further down.

Stuffy Doll – Again, not really enrage but definitely something we want to drop a lot of damage on, he certainly earns his spot.

Sun-Crowned Hunters – If we can stick this guy with Indestructible (We’ll talk about that in a minute) he and Marath or a similar pinger turn into a turbo-fireball effect. Which seems strong.

Wall of Hope – Turns the pings into lifegain, certainly not something we don’t want.

Druid’s Call – Turns target creature into Saber Ants but for the only true #1 tribe in Magic, Squirrels.

Rite of Passage – Turns all of your creatures into Snapping Sailback, which is excellent in combination with our board-wide pings.

Speaking of those pings, here’s a list of enablers that don’t have “Marath” in their name and other things that help us get MAD:

No Pain, No Gain

Aegis Angel – Makes one of our things immune to death while still letting them receive the full benefit of our pings. Also a 5/5 flyer, which is sure not nothing.

Bloodfire Dwarf – A little body that makes a little explosion when he dies. It’s fine.

Frontline Medic – Gives our entire board indestructible as long as we’re on the offensive. Which, by the way, is where we want to be.

Gruul Ragebeast – Turns all of our creatures into removal – And if they had enrage we benefit even more from it because our creatures get injured in the attempt.

Inferno Titan – A 6/6 that can ping 3 creatures every time he enters or attacks? That’s pretty fine. Especially since he has firebreathing.

Raging Swordtooth – A reasonable body with a relevant keyword that drops a boardwide ping on entry. It does everything we want.

Smoldering Werewolf – Comes in and pings stuff and then turns into a regular source of pinging and/or removal post-flip. Surprisingly good here.

Subterranean Shambler – Another board-ping that can strike twice. And probably should unless you want to pay that echo cost.

Thundercloud Shaman – See above – No echo on this one though so you can keep the body.

Ulasht, the Hate Seed – King of the pingers, he dishes out pain and bodies in equal measure as long as you have a reasonable board before it drops.

Ulvenwald Tracker – Lets us turn our ragers into removal while buffing them, which is pretty excellent. As is any fight-based removal with enrage really.

Warrior en-Kor – Unlike the rest of our deck this guy absolutely doesn’t want to take damage. Good thing he can just pass it all off to one of the creatures that does huh?

Arcbond – Lets us turn our single-pings into every-pings, which is nice. Is also part of an infinite combo – Slap Arcbond onto the Stuffy Doll and keep using Warrior en-Kor to put the Arcbond damage back onto Stuffy Doll your opponent will take 2 damage per loop for the 1 you’ll be taking.

Aether Flash – A bit of a double-edged sword – You’ll want to get some anthems on board before you play this or you’ll end up killing all of your tokens as they come out. You can also make infinite Sprouting Phytohydra with only one anthem, which is pretty cool.

Indestructibility – See Aegis Angel – but bear in mind that this is, for most decks at least, considerably harder to remove.

Pariah – Slap this on something with indestructible (Stuffy Doll is a personal favourite for this) and sit back enjoying your new invincibility.

Pyrohemia – Maybe the strongest enabler in the deck – You should pretty much always have a creature and this lets you trigger every enrage you have for only one mana a pop.

Breath of Darigaaz – Can be a board-ping or a medium sized board-wipe depending on what you need. Both are pretty great.

Molten Disaster – Like the above but even more flexible – Can flip between enrage enabler and hard boardwipe depending on your mana investment.

The third important part of the deck I keep referencing is yet to come though – It’s anthem time.

Angelic Skirmisher – Not Entirely an anthem but it’s a board-wide buff so I’m willing to call it. It’s also part of a secondary infinite combo to gain infinite life – Give Boros Reckoner or Spitemare indestructible and lifelink (From the skirisher) and have them continually target themselves with their damage triggers.

Forgotten Ancient – Also not really an anthem… at all… but he provides the same function as one in this deck, letting us throw around counters to keep our team alive through the pings.

Cathar’s Crusade – Also not quite an Anthem but it may as well be – Probably better overall considering.

Dictate of Heliod – +2/+2 for the board means you just got immunity from Aether Flash and Pyroclasm while still being able to pick up all of the benefits.

Glorious Anthem – The card-type namer – gives all of your creatures a static power boost. For only 2 mana that’s pretty fine.

Collective Effort – Removal, an Anthem and an Erase in one handy-dandy package. Potentially all three at the same time. Sick.

Now while a lot of our pings count as removal, it’s often that we’ll need to bring in something with a bit more punch to take care of beefier enemies or, god forbid, noncreature threats:

Acidic Slime, Reclamation Sage – Noncreature removal on a stick, nothing wrong with either of these guys.

Condemn – That thing that was about to attack you? With this you can put it on the bottom of your opponent’s library where it can’t hurt anyone.

Naya Charm – Removal? Revival? Winning you the game? This card can do it all.

Blasphemous Act – A big boardwipe that also triggers all of our Enrage guys one last time on their way out. Excellent with ones like Broodhatch Nuntuko who drop creatures equivalent to the damage.

Then we have the glue that keeps it all together – Ramp and Card Draw.

Primordial Sage, Soul of the Harvest – In this deck they’re more or less the same thing – Cast a creature, draw a card. Advantage to Primordial Sage is that you get the card even if the spell is countered though.

And that, Ladies and Gents, is the deck. Bearing in mind this was done with a budget though – and that there’s a lot more you can do without one:

All of these cards either open up more of the combos in this deck or just enable us to put them together easier. The Ballista and Bellowing Aegisaur in particular are very good friends, especially with Rite of Passage.

If you want to go in harder on the deck’s Enrage theme then Dinosaurs are the way to go, since there will undoubtedly be more in the next set –  And Gishath goes in hard even when he’s not in the command zone.

This being a tri-colour deck, I’m obligated to remind you that the manabase that is currently in this deck is not the greatest in the world. It’s not the worst you could do by any means (Looking at you Commander ’17) but you could be doing a lot better.

And there we have it, one Enrage deck, hot off the presses in time for the release of Ixalan. Think I missed some good budget includes? Think the deck is great? Think I should have gone with an Ixalan Commander? Leave us a comment below or send us a message on Facebook or Instagram – We’re always happy to chat!

1 thought on “No-Cash Commander – Marath, Will of the Wild”