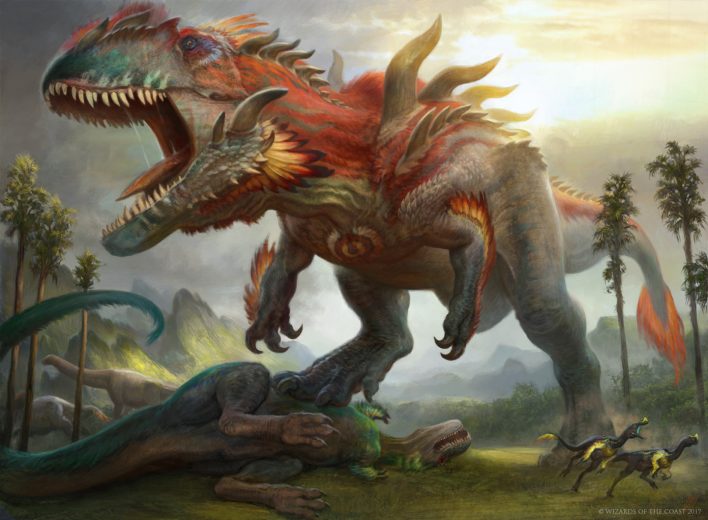 Hi everybody! Crazy’s back and it’s that time of year again when I get to talk about the new Legendary creatures – This one in particular I’ve been looking forward to as I’m a pretty big fan of both Dinosaurs AND Pirates. For those who’ve not seen the other entries in this series I’ll be discussing all the new legendaries primarily from an EDH standpoint (Both as the commander and in the 99) but with a quick rundown on the kind of play I expect them to see in other formats. Starting us off is one of the more unconventional legendary creatures I’ve ever seen: 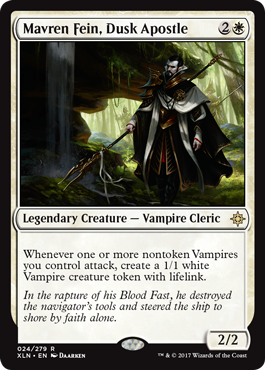 Just to check, I did a gatherer search for Mono-White vampires before Ixalan’s release. None were found. As such, I’m going to go ahead and assume that there won’t really be the creature density to run this deck based on the relatively small number of eligible vampires spoiled thus far as well. However, that’s not to say that Rivals of Ixalan won’t give us the extra vampires we need, in which case I’m more than happy to eat my humble pie.

In the 99 this guy just seems excellent. In a vampire tribal deck, of course. How convenient that we just got the new king of Vampire Tribal, Edgar Markov eh? Especially since with Edgar making Vampire tokens as he does you were probably already running some token support in your list along the lines of Intangible Virtue right?

Given some of the heavy support we’ve seen for it so far, I’d honestly be pretty surprised to not see this in a Standard token build of some sort, between the not-Gaea’s Cradle and the land that pumps out more vampires, both of which come online when you have a bunch of creatures in Green and White. It could have some legs in Modern as a token-producing bear but there’s a lot in B/W tokens competing for that spot so perhaps not while we have, for example, Bitterblossom. 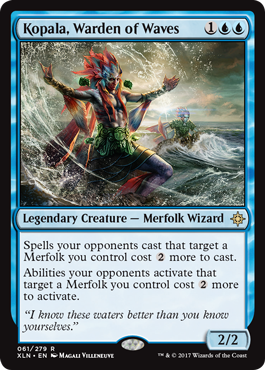 A mono-blue creature that says your opponents can’t do things? Perish the thought.

I was pretty shocked to find out that with all of the merfolk lords that exist none of them were actually legendary – This is the first true merfolk tribal commander folks, and I expect it to be built as such. Especially when the assistance Kopala provides comes in the form of keeping the rest of your lords safer from spot removal. Combined with the aggressive nature of merfolk as a whole and the tempo game you can play in Mono-Blue I expect to see him drowning some tables pretty soon.

There are definitely reasons to play him in the 99, and those reasons are all “I want to play Merfolk Tribal with more colours”, say, using Sygg, River Cutthroat or Prime Speaker Zegana as the commander, or even the other legendary Merfolk in this set, who we’ll get to shortly. This means you can play Kopala with some of the multicoloured threats of the tribe like Cold-Eyed Selkie or Inkfathom Witch who might appreciate the resilience.

Haven’t seen enough of the set to judge it for standard but if there’s even a reasonable Merfolk suite overall you can bet your ass this guy will see play as a prime piece for the incredible tempo repercussions. I won’t say never for Modern either, probably not in the mainboard but perhaps against removal-heavy decks this could come out of the sideboard for Modern Fish. 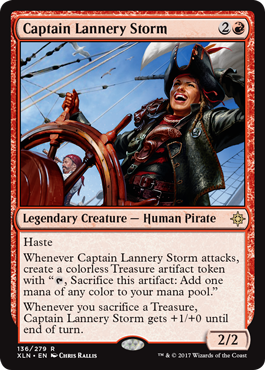 Not a golddigger. She promises.

I’m not overly sold. For me this slots into the same category as Kari Zev, Skyship Raider, ironically also a mono Red pirate, but also a low-costed aggressive Red Legendary creature. Seems quite unlikely to me that this would make much impact out of the command zone. Having said that, I would be interested to see the inevitable “Gold Rush Voltron” this would turn in to.

Ignoring the fact that further down is a pirate tribal legendary creature that would absolutely love this, Artifact-based decks in red might not be totally opposed to this Femme Fatale as someone who can consistently produce expendable artifacts – Daretti, Scrap Savant and Breya, Etherium Shaper immediately come to mind as commanders that would like a considerable amount of her treasure to barter with – As well as any deck running the new card “Revel in Riches” that has you automatically win if you have 10 or more treasure during your upkeep.

I doubt she’ll break out of standard, if she even breaks in to standard in the first place. Depends on whether or not either Pirate Aggro or Treasure combo become decks – she’ll fit into those like a glove. She just feels a tad too slow for other formats to me. 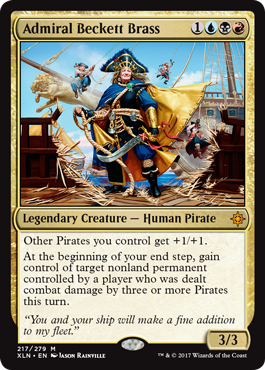 Yo Ho Ho and a bottle of your opponent’s rum.

Clearly what the card was designed for, this girl wants to be at the helm of a fairly large pirate crew at all times – And what better way to ensure that than by running her as the captain of her own tribal deck? Pirates aren’t even an entirely new creature type, featuring classics like Kukemssa Pirates and Rishadan Cutpurse to help pad out your forces. Woe betide any opponent who lets you get a board through their defences too with an ability like that.

In my quick investigation into the history of pirates I also found that there we no pirates outside of Admiral Beckett’s colours. Why is this relevant? Well it means there’s basically no excuse to ever put her in the 99 of a deck since there’s nobody else worth using at the head of a pirate commander deck of the likes Beckett wants to be in. Unless you’re attempting the fabled “Tribal Tribal” of course.

Too slow for anything but standard without a doubt. I’m certainly not going to say “No Chance” to standard though – It’s certainly not entirely out of the question that she sees play in some kind of Pirate Aggro/Midrange brew, but 3-colour in Standard may be a bit greedy yet. We’ll find out.

Life finds a way. In this case that way looks like a feathery T-Rex.

Like the one above, he was built for this. And from what we’ve seen so far of the set, being able to pull out even just 2-3 dinosaurs on a single swing stands to be absolutely ridiculous, and that’s not entirely taking into account the fact this guy has three relevant keywords too. For those of you planning on building this (Like me) you may find this useful – It’s the full list of cards that Wizards have errata’d into Dinosaurs, containing classics such as Magmasaur and Deathmist Raptor to add to the new hotness that is Ixalan’s Jurassic beatdown force.

There is, in fact, an argument for playing Gishath in the 99 of your Naya Dino-Tribal deck, and that argument comes in the form of Marath, Will of the Wild. Personally I don’t wholly buy into it but there’s something to be said for keeping a creature in the command zone that can trigger the new Enrage mechanic as easily as the elemental goat here can, especially with some of the enrage effects we’ve had revealed so far, with some distributing +1/+1 counters and some emulating Rampant Growth among others.

With Dinosaurs ramping they way they are, with two cost reducing creatures (a la Dragonlord’s Servant) and one that lets you Rampant Growth whenever he gets hurt, I could legitimately see this guy topping out the inevitable dinosaur Midrange deck that people will at least try in standard – Probably just a tad slow in other formats though. 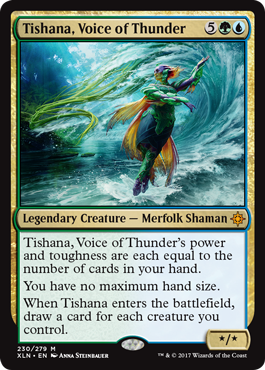 So I heard you like drawing cards? Let me introduce you to your new best friend.

My first thought with this card is how incredibly similar it is to Prime Speaker Zegana – Both of them being expensive Blue/Green Merfolk that draw a ton of cards on entry. The key difference of course is that while Zegana wants you to go tall for maximum value, Tishana wants you to go as wide as possible, so cards like Avenger of Zendikar are the order of the day here. Notably, as a UG Merfolk it provides some minor tribal support as well, giving you another way to play that perfect Merfolk Tribal deck that can also use Kiora planeswalkers.

It certainly has a place in some lists – UGx decks that want to go wide like Edric, Spymaster of Trest or certain builds of Riku of Two Reflections or Animar, Soul of Elements that can increase the value gotten from it are high picks for this kind of card I’d say. 7 mana is a hefty cost though, so it would certainly need some consideration as to whether or not the deck can support the high cost of the card.

I’d lean towards “No” here. In the past cards like this which are both expensive and rely on you having a board haven’t had a great track record in competitive constructed formats. Having said that, if you need to crack open a board stall in limited then this seems a fine way to draw into a way to do it. 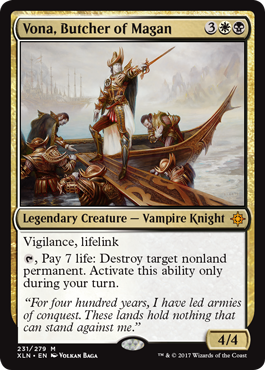 Getting some real Spanish Inquisition vibes from this one, but I have a feeling your opponents may well expect it.

It certainly seems like a strong card. Reasonable body, relevant keywords and a very powerful ability. It’s just missing a lot of the “Wow” factor I would expect from a commander – He doesn’t have synergy with anything as such, he’s just a pretty strong card. There are certainly things to go in a deck with him at the helm though – I’d probably focus on his ability, using cards like Illusionist’s Bracers to increase the value of his ability and untapping effects like Staff of Domination to get additional uses out of the ability.

Well for one he’s a vampire – Which is certainly something considering the commander product that was just released. Other decks though? This is pretty fairly costed for something with that body and keywords alone, and this one’s also a repeatable source of removal as long as you have the life to back it up – So I could see this going in decks with a heavy lifegain component like Oloro, Ageless Ascetic or decks that care little-to-none about their life total like Selenia, Dark Angel.

If there’s a deck it’ll fit in, I can see this being an absolute force in Standard. If it attacks and blocks each turn it’s tap ability becomes mostly a freebie and having “Destroy Target Permanent” in Standard is going to be incredibly strong regardless of the cost. Might be a tad pricey for more powerful formats though.

And there’s the rundown of all the legendary creatures in Ixalan – I have to say I can definitely get behind all of these legendary creatures, especially with the tribal subthemes of this set coming out in force. I’m going to be featuring one of them in a No-Cash article within the next couple of weeks – If you want a say on which one that’ll be then drop us a comment below or send us a message on Instagram or Facebook – We’re always keeping an eye out!