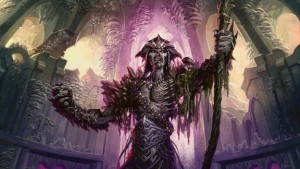 Hey everyone, welcome back to another edition of Slice of (Colour) Pie, where we look at the various colour combinations of magic, and their applications and uses within edh!

This week, we’ll be taking a look at the powerful combination of colours that is Green/Black, also known as Golgari!

Strengths, and how to use them 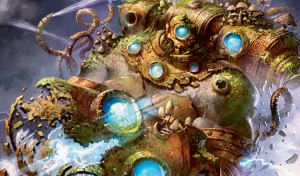 Golgari is a powerful colour combination, with plenty of removal. Cards such as Abrupt Decay and Putrefy give you powerful targeted removal for more than just creatures, whilst Maelstrom Pulse and Gaze of Granite allow a wider board wipe potential.

In addition to this, cards like Jarad, Golgari Lich Lord, The Gitrog Monster, and Jarad’s Orders, give you the option to play heavily around your graveyard, sending stuff to your own graveyard and then getting boosts, or bringing stuff back to the battlefield! The graveyard based abilities of many green/black cards also open the door to cards with delve, such as Murderous Cut, and the Scavenge keyword from Return to Ravnica!

Green/Black is also the colour combination of the mighty Deathrite Shaman; banned in modern and sometimes referred to as the one-mana Planeswalker, this guy does some great stuff whilst synergising with the graveyard based antics of many Golgari decks! 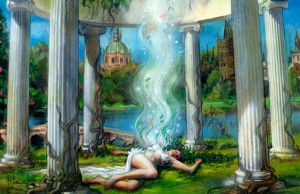 Being rather graveyard heavy, Green/Black decks can often suffer from cards that remove their graveyard, such as Rest In Peace and Relic of Progenitus, and these same decks, whilst having plenty of big creatures and removal, don’t tend to have much in the way of protecting their creatures from other peoples removal! In addition to this, the colour combination doesn’t have a lot of ‘free’ card draw; Whilst cards such as Sign in Blood and Night’s Whisper do draw you cards, they cost life! Additional engines include Phyrexian Arena or the premium Survival of the fittest, but in a creature based, recursive strategy you may also find Grim Haruspex or Harvester of Souls to be more your taste.

Potential commanders and other staples 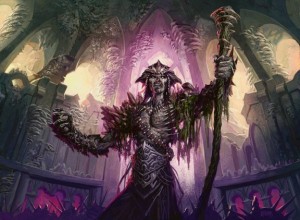 Green/Black has some powerful stand out cards and some high tier commanders, so let’s take a look at what we’ve got!

Jarad, Golgari Lich Lord– This guy is great for graveyard decks; He gets bigger as your graveyard does, he can feed your graveyard whilst killing your opponents, and you can bring him back from the graveyard easily with his other ability (which combos incredibly well with an active Crucible of Worlds or The Gitrog Monster)! Jarad players have easy access to instant kill combos using Lord of Extinction or making an abnormally large Phyrexian Devourer and sacrificing it before it kills itself!

Hapatra, Vizier of Poisons– Hapatra is cheap to cast, and whenever she deals combat damage you can put a -1/-1 counter on something! Not only that, but she also makes tokens when you do! She goes nuts with Blowfly Infestation, allowing loads of death triggers to draw you far ahead with Grim Haruspex, or kill the table with Blood Artist!

Meren of Clan Nel Toth– Another great graveyard commander! Your stuff dies, so you get experience counters, and then the more you have the bigger the threat because you can bring your creatures back again! She’s probably one of the best experience commanders because of how she can gain experience incredibly well with reanimation loops, my pal Unmistakable looks at her in a fair bit of detail in one of his Top 5s last year!

The Gitrog Monster– Whilst he might not seem like much, there are actually some pretty competitive lists for this guy out there! Sure you’re sacrificing lands, but you also get to play extra lands and draw cards! He loves land based combo decks, is best friends with Life from the Loam, and if that gets you a bit excited, make sure you check out Crazy’s budget DeathFrog deck!

Abrupt Decay– Now this is one hell of a card right here. 2 mana to destroy any non-land permanent of cmc 3 or less, at instant speed?! There’s a reason this sees modern (and even legacy, some vintage) play! This card has a warm place in my heart, as it was this card that essentially started a group of friends on the journey to making this blog, almost a year and a half ago!

Deathrite Shaman– The ‘One mana Planeswalker’. As mentioned above, this guy does a ton of stuff! He can hate on your opponents graveyard decks or make use of your own, he can generate mana, he can gain you life or make your opponents lose life… and for ONE MANA! This guy is an auto include in any green/black deck!

Golgari Charm– Another great, cheap, multipurpose card; A mini board wipe, and anti-board wipe, and enchantment removal! While not as strong as other charms (Rakdos or Azorius charms are fantastic in the right deck), the ability to wipe away mana dorks while still having the option to pop a Rest in Peace is too good to turn down!

Vraska, the Unseen– Now how could I not include a planeswalker (and the potential villain of Ixalan, no less!)? Her +1 says ‘don’t hit me’, which is a must on a 5 mana walker; her -3 is the best kind of removal, and her ult creates 3 creatures that can win you the game (if you’ve played your control game properly, of

Corpsejack Menace– This guy is great in a creature based deck, if you have some abilities that give things +1/+1. He literally doubles the amount of +1/+1 counters that go onto all your creatures! In the right build, this is insane! Combine him with hydras like Primordial Hydra or Kalonian Hydra and watch yourself run away with games!

Gaze of Granite– Costly, but extremely effective! Destroy each non-land permanent with cmc X or less? This can get you out of many bad situations! (Unless that situation is Gaddock Teeg, but not many board wipes will do that!)

So there we have it, a quick look at the colour combination of Green/Black! A powerful colour combo if built right, and also a fun one!

I hope you’ve enjoyed reading, and if you ever have any questions, give me a shout! But for now, it’s bye from Yami!