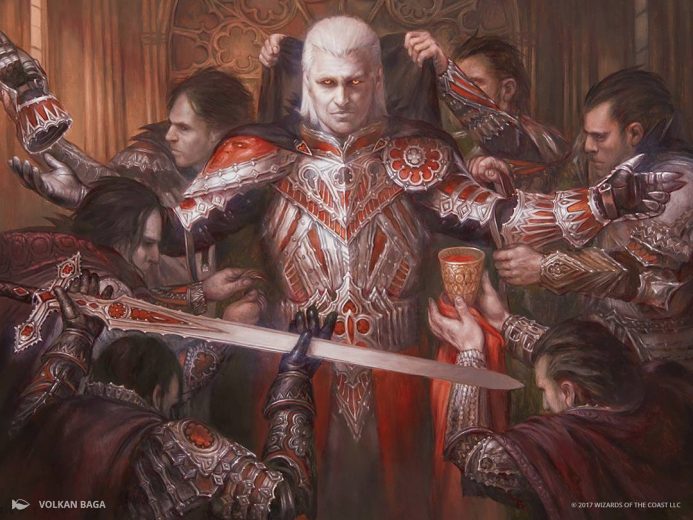 It’s that special time of year again where we commander players get a product that’s just for us – And lots of people may well be taking their first forays into the format. One problem – The preconstructed decks mostly suck in terms of pure power. That’s where I’m stepping in – Assuming you spent $30-$40 on a precon deck I think $20 worth of improvements is  probably within the realms of possibility? Given the focus of the set this time around as “Tribal Matters” I’m only going to be looking at the four commanders with the “Eminence” ability word but I do enjoy many of the other commanders that have been revealed as well – In fact you can probably expect a no-cash for at least one of them very soon. For now though, we’ll start with:

Arahbo, Roar of the World Kitty got claws and loves to share! Everything about this cool cat screams “Turn sideways”, from his Eminence ability boosting the power of one cat every turn to his on attack trigger boosting as many cats as you can pay for to titanic levels of power. Especially with the two in combination.

So how do we capitalise on “All cats all the time”? For one, there were two rather tasty Cat rares in the latest block, including a $2 lord, Regal Caracal and a rather powerful beatstick and token producer by the name of Pride Sovereign ($1.65). And while we’re on Amonkhet, we should probably pick up Adorned Pouncer ($1.15), who can capitalise hard on both of Arahbo’s abilities by providing natural double strike.

As far as non-cat cards go – you may have noticed looking at the decklists that there’s a minor equipment subtheme. Assuming you want to chase that down the rabbit hole I would highly recommend Stoneforge Masterwork ($1), giving a potentially huge amount of stats for a quite minor amount of mana – Which is excellent in combination with the attack trigger granted by Arahbo. Another, considerably more expensive, bit of equipment that should be used here is Konda’s Banner ($6.50) being a +2/+2 boost to all of your creatures as long as you can slap this on your commander or either of the other GW Catmanders.

For the other big pick of this deck, I’d recommend Ajani, Caller of the Pride ($7) – Because what is a cat deck without a cat planeswalker? This one in particular has excellent synergy with Arahbo on all of his abilities – The +1 gives consistent boosts to a Cat of choice, which the attack trigger can double up on, with the -3 that gives Double Strike granting a colossal haymaker when you need it. Should you make it to his -8 you’ll be rewarded with a veritable army of cats to delete opponents with impunity.

Now with all of these cards going in, obviously something needs to come out. At the top of my list would probably have to be Hunter’s Prowess – Nobody needs to draw that many cards, and even if they did it would probably not be on a 5-mana sorcery that needs a creature, it’s just asking to be blown out. I’m also not a fan of Argentum Armor – Sure it’s powerful but 12 mana is a big asking price. Other than that, I’d decide if you want your version of this deck to look more like a Voltron deck or a Token deck and adjust accordingly. For example, the Token build isn’t going to want an expensive beater like Phantom Nishoba in the same way the Voltron build doesn’t care for White Sun’s Zenith.

Moving on to a bit more of a straightforward tokens build: A truly terrifying set of abilities, generating tokens from the command zone and boosting them when he hits the board is not something to take lightly at all. Especially taking into account the fact he has Haste so that anthem effect can indeed come out of nowhere.

We’re going to start with the biggest card you need in this deck, Bloodline Keeper. Clocking in at $8.50 by itself, I’m still more than willing to shell out that much of my budget for a vampire lord that not only gives them all +2/+2, but can continue to produce additional vampires once he;s hit the board – And especially with Edgar’s own vampire-making capabilities, flipping him should be a paltry task. As a very long-standing tribe, there is no shortage of Vampire Lords, so there are of course budget options in there like Indulgent Aristocrat, Stensia Masquerade and Stromkirk Condemned, who come to a grand total of $1 between them.

Since we’re going to be having a lot of tokens, it would probably not hurt to be using things that boost tokens or token generation, such as Intangible Virtue or Leyline of the Meek for another $2 total to give buffs to all of your vampire tokens Edgar will be pumping out. Since those tokens are missing haste – I’d also recommend perhaps packing some mass haste effects like Fervor (50 cents!).

For a final big pick, another Planeswalker – Sorin, Lord of Innistrad ($6.50) – Making Vampires on his +1 and giving your creatures a constant boost on his -2 as well. His -6 is mostly irrelevant to us as a vampire tribal deck but the effect itself is still incredibly powerful.

As for recommendations on what to remove, Blood Tribute is firmly at the top of my shit list as a 6-mana burn spell that can only kill someone when they’re at one life – especially when the life totals will likely have gone down by the time you hit turn 6, so we’re probably getting no more than 12-13 life out of this on a good hit. I’m also not the biggest fan of Outpost Siege, the “Exile-Draw” mechanic has never really appealed to me and the Dragons effect seems negligible when we’re already running Blood Artist and Falkenrath Noble in the base deck.

Another commander that loves the tokens, but in a very different way: With an effect reminiscent of Twinflame and Kiki-Jiki, Mirror Breaker, this guy just screams combo to me, or at least a hell of a lot of value.

Stonybrook Banneret already seems like a great start costing a positively WHOPPING 50 cents and reducing the cost of all of your wizards – Making Inalla’s ability essentially free. And for only another $2 we can add a few more wizards that are fun with Inalla’s ability, Arcanis the Omnipotent (Draw 3? Me likey) and Docent of Perfection – one of the rare power and toughness lords that exist for the Wizard tribe.

Being in a combo-heavy metagame may tilt me more toward this than I should be, but I’m also heavily inclined to recommend Supreme Inquisitor – Who for only 70 cents can keep your opponent’s combos on lock by putting the pieces in exile. Especially powerful since it’s on a repeatable effect. Another good card is Vedalken Aethermage (25 cents), who can bounce those pesky opponent’s Slivers to their hand. Of course, the real reason you play it is the fact you can go ahead and pay 3 mana to discard it and find any wizard in the deck. Much better.

My biggest pick for this guy is also arguably one of the most the most contentious exclusions from the base list, Riptide Laboratory, which is still spiking as I type. It may not remain $10 for too much longer if Inalla takes off as it lets you do horrific things with his ability by letting you re-use your wizards whenever you want, perhaps even saving them from removal while you do it. Also with all the fun enter the battlefield effects in this deck, I would highly recommend Rite of Replication – immediately making 5 of a wizard of your choice for massive value – conveniently enough to tap for Inalla’s second ability too if you were looking to burn your opponents out. Also as one of my very favourite cards in Magic, I’m very happy to say that Sundial of the Infinite ($1.25) goes perfectly in this deck as a way to abuse your commander’s ability – since you can just end the turn when you would otherwise have to exile your tokens.

To drop from the deck? Perhaps a preference pick, but I would probably take out Mairsil, the Pretender first – When he’s not in the command zone I just don’t feel like we’re getting enough value out of him. Probably swiftly followed by Magus of the Abyss – It just doesn’t seem great to me in a deck that isn’t consistently producing tokens that stick around at the rate, say, Edgar Markov does.

Finally, a tribe very near and dear to my heart: The God-King of a race of God-Kings. He’s already been mentioned by my fellow writer and talked about at some length in our new series about tribes. I’ve got some things to say regarding the decklist in particular though.

First off, the creaturebase in this deck is not bad at all – At the very least there probably aren’t many updates to it I’d make that are in budget (Scourge of the Throne pls). What I would make some serious upgrades to is one of the WORST manabases I’ve seen in a wizards product in a very long time. Seriously, this has more basic lands than the Cat deck. This is a 5-colour deck and it needs the fixing to match – On a budget there’s not much to recommend but some cheap cards include Theros staple Nylea’s Presence, turning one of your lands 5-colour for only 2 mana and 15 cents, Ancient Ziggurat, a 5-colour land for $3.50 that can only be used on creatures (Spoilers, that’s all the important cards) and Prismatic Geoscope ($1.50), since we’re playing all these basics anyway.

Given that we have every card in Magic to choose from, it’s pretty difficult to make any other targeted recommendations, but Urza’s Incubator ($6.50) in particular seems incredibly strong for a tribe like dragons where your average mana cost is considerably larger than most players would consider “Competitive”. One creature I’d add to the deck as well, since we already have Scion of the Ur-Dragon and Atarka, World Render I think you’d be remiss to exclude Moltensteel Dragon – who for only 40 cents can turn Scion into one hell of a finisher. I’m also not entirely sure why Sarkhan’s Triumph isn’t in this deck considering it’s 3 mana (and 25 cents) to find a dragon. I’d also probably not turn down Fearsome Awakening, reviving a dragon even more powerful than before.

As for cuts from this deck? Let’s start with the landbase. You can cut any number of the tri-lands or vivid lands from the original list for rocks or better land with little to no trouble, you’d have a hard time making it worse. I’m also not entirely sure why Palace Siege is in this deck – Bringing a dragon to hand every turn is alright but there are just better cards for that slot.

And that has been your bumper edition of No-Cash Commander – No full list this time but I suspect you’re all going to be too busy with your new tribal decks to try a new no-cash build anyway. I know I will be! Think I missed something vital? Want to suggest which of the new commanders I should feature in the next no-cash? Just want to tell us we’re great and/or terrible? Feel free to send us a message on our Facebook Page or just leave a comment below.