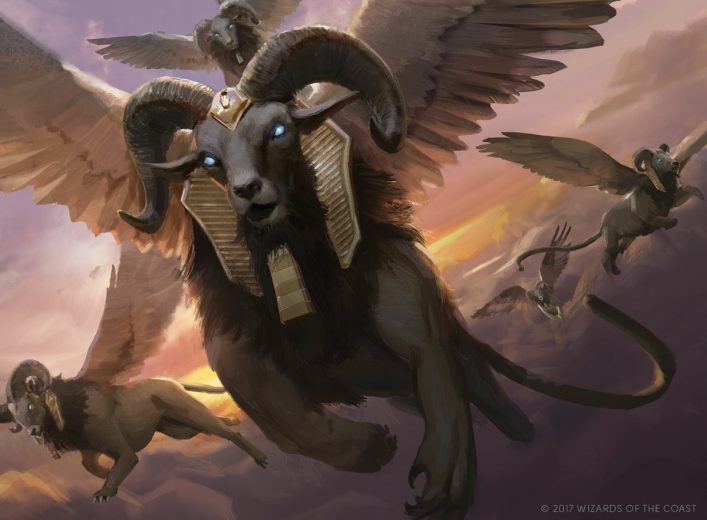 Hey everybody, Crazy here with the Hour of Devastation edition of No-Cash Commander.

I had a lot of trouble choosing who to go for this time, I really liked Neheb, the Eternal and The Scorpion God but I either couldn’t get inspired on a budget or just thought they overlapped the other decks already in the series too much – So I took a third option and went for a good old off-the-wall tribal deck. Clocking in at $48.23, please give a warm Amonkhet welcome to the first mono-blue commander in the series, Unesh, Criosphinx Sovereign:

A truly classic aerial beatdown, with the added benefit of having most of our creatures also provide us with a 4-card Fact or Fiction to maintain momentum as we expend resources. With all this card draw, we also have an infinite combo stolen straight from last week’s Lavinia deck in case we need a noncombat way to close out. So we’ll go ahead and get that out of the way:

Deadeye Navigator + Peregrine Drake = Infinite mana: Like I said, stolen straight from last time’s deck. What can I say? It’s a classic. For those who didn’t see it – Flickering Peregrine drake for 2 mana a time nets us 3 mana a loop when it re-enters the battlefield, effectively giving us infinite mana. Notably, Deadeye Navigator also lets us flicker any sphinx with Unesh out to re-use our mini-Fact or Fiction (I’m gonna go with Mini-FoF from now on.) We’ll sink that infinite mana into either Blue Sun’s Zenith or Stroke of Genius targeting someone else to have them draw out and die.

Of course, this isn’t the main focus of the deck – I know what you’re all here for…

Sphinx and Stones may break my bones…

Note: To save repeating myself constantly, all of these creatures will trigger Unesh’s ability to do a Mini-FoF.

Alhammarret, High Arbiter – Someone Unmistakable has been talking about recently – This colossal sphinx keeps away a threat of your choice before it ever hits the table as well as being a pretty strong beater.

Arbiter of the Ideal – A strong beater in it’s own right that can also cheat some of your other threats into play – And with the amount of scry in this deck it’s not too difficult to push some strong things through this ability.

Argent Sphinx – The flicker ability will likely not be relevant too often but this being a 4/4 for only 4 mana is great, especially when that’s actually only 2 mana with Unesh.

Chancellor of the Spires – The mill isn’t something we particularly want but stealing a spell from an opponent’s graveyard as well as triggering the mini-FoF makes this card just ooze value.

Conundrum Sphinx – So mash the above Argent Sphinx and Arbiter of the Ideal together and you’re getting why we’re playing this card, it’s a cheap, powerful beater that can turn us knowing the top card of our deck into a silly amount of value.

Glyph Keeper – Another strong flying beater with not only a good amount of resilience to spot removal, but it can even come back to the board after most boardwipes.

Guardian of Tazeem – Short of going up against another flyer-focused deck, chances are our opponents won’t have a huge amount of flyers to stop us from beating down. So being able to Frost Breath them every time we play an Island is an effect that we love.

Jwar Isle Avenger – More so than any other, this Sphinx is CHEAP. Managing to play this in the same turn as Unesh even is incredibly easy for a good burst of advantage.

Master of Predicaments – Very tricky to use properly, mainly because almost all of our Sphinges (Yes that is the plural, I hate it too) cost more than 4 mana, so it would be quite difficult to force out a Sphinx. On the other hand, we have some chance of forcing out a sphinx when we punch a guy if they think you’re double bluffing. Better work on that poker face.

Prognostic Sphinx – It lets us scry a silly amount and is pretty difficult to get rid of with spot removal. It’s pretty great.

Sandstone Oracle – Tops our hand back up if we’re somehow low, and adds the mini-FoF on top of that!

Sphinx Ambassador – Now here’s a card. This lets us steal any creature from our opponent’s deck as long as they can’t guess which one we stole – It’s almost a repeatable Bribery. ALMOST.

Sphinx of Jwar Isle – Another strong flying beater that’s difficult to hit with spot removal, that has the added benefit of synergising with the sphinges that want us to know our top card.

Sphinx of Lost Truths – This card, especially with Unesh out, is an absolute value bombshell. With Unesh out, you’re paying 5 mana (3, plus 2 kicker) to draw 3 cards AND have a mini-FoF.

Sphinx of Uthuun – Even without Unesh, he gives us a full-blown FoF when he hits the board, and only gets sillier with the King Sphinx.

Vexing Sphinx – Another very cheap Sphinx, and honestly one I’m not totally sure about, but it seems to give us enough value with or without Unesh down that I’m willing to give it a shout.

Windreader Sphinx – Truly, a value bomb. Drawing a card whenever a flying creature attacks (Spoilers: All Sphinges fly) is utterly ridiculous for us.

So those are the main bodies, but we do have some other bodies to support the plan:

Archetype of Imagination – Makes our flying army near-enough unblockable by most non-green decks, since those will be the only ones with Reach.

Mothdust Changeling – Okay so it’s technically a Sphinx but only in the way that it can also trigger Unesh and benefit from our tribal cards.

Stormtide Leviathan – Means we can’t lose the ground war. Mostly because there is no ground. Flyers though? Like the Sphinx Army? Go right ahead. Also he’s smacking for 8 every turn.

Warden of Evos Isle – Reduces the cost of all of our flyers, which is almost all of the creatures in our deck, and especially all of the Sphinges.

We also have some benefits for the exclusive members of “Club Sphinx”:

Call to the Kindred – One of our exclusive benefits is the ability to use this special aura to call up one of your club members every turn and let them in for free!

Door of Destinies – As an added bonus, for every friend you introduce to club sphinx, all of the members get more powerful, even after they leave!

Urza’s Incubator – We even have a special additional discount for all of our members, reducing the cost of entry by 2 mana per.

Favorable Winds, Gravitational Shift – One for not only the exclusive members of club sphinx, but all of their other skybound friends, offering buffs to them and, in the case of Gravitational Shift, a reduction in power of ground forces.

Alright, that’s enough of that. Here’s the important cards for making our plans happen:

Aetherspouts, Aetherize – Opponent’s tapping out at you? How’s about a budget Cyclonic Rift to make them regret it?

Cyclonic Rift – We also have the real thing. Have fun with that.

Capsize – Repeatable bounce of any permanent – An alternate win-condition for our infinite mana as well.

Commit // Memory – A Pseudo-Counterspell you may have seen in another recent article that also allows us to pull a Time Reversal later on – Important if the game goes too long and you’ve been extracting maybe a bit too much value from the sphinges.

Control Magic – Can’t believe this was as cheap as it was – 4 Mana to steal a creature until it or the enchantment dies.

Imprisoned in the Moon – Nice Commander you got there. Be a shame if it were a Wastes.

Curse of the Swine – Nice creatures you have there. Shame if they were pigs.

Finally, we have the various value and mana generation cards in the deck – As if we didn’t already have enough of both:

Blue Sun’s Zenith, Stroke of Genius – 3 mana + “X” to draw x cards – Notably due to “Target Player” can also be used to draw someone out after you make infinite mana.

Fact or Fiction – The original and still great, 4 mana for a 5 card FoF.

Jace’s Sanctum – Makes all of our counterspells and removal cheaper while also adding extra value to all of them, pretty great card.

Treasure Cruise – I sure do enjoy Ancestral Recall when we’re putting all these cards in the graveyard with our various FoF effects.

Conjurer’s Closet – I sure do enjoy flickering my sphinges and retriggering my mini-FoF at the end of every turn.

Kefnet’s Monument – Reduces the cost of most of the cards in our deck and turns all of our creatures into budget Frost Breath – It seems pretty strong.

And apart from the land (Including a tasty Halimar Depths) that is the deck. Not sure there’d be too much I’d upgrade for this commander in particular but there’s sure some stuff for Blue decks:

The biggest daddy of the sphinx world, Consecrated Sphinx, is unfortunately a silly amount of money – But boy is it worth it. And Panharmonicon just doubles up on Unesh and other ETB Triggers in the deck, which there are a lot of.

All of the above are excellent (And pricey) cards that would be great in any Blue deck. Not much to say otherwise.

And that right there is the list – I had a lot more fun than I thought putting together the list – Still not entirely sure this deck doesn’t need an Elixir of Immortality to reload after making all of this value. If you enjoyed this article and want to keep tabs on our further content, feel free to drop us a like on our Facebook Page, we update it after every article!