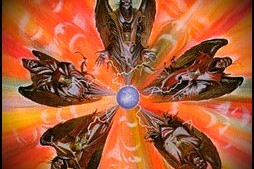 Hey guys, it’s Yami, and this week I have decided to take a look at a deck of mine, my most recent pet project if you will. A few months ago, I decided I wanted to build a new deck, and after some research, and some discussion with Unmistakable, I decided Leovold-Doomsday was the way to go (Why yes, I am an awful person – Unmistakable)! However, I have a bit of a budget when building decks, and so I often tend to work on them over time….. Boy am I glad! As the deck got close to finished (or at least beta) The guy heading it up, good old Leovold, Emissary of Trest, went and got himself banned from Edh! Thankfully, I had not yet bit the bullet on him, so I saved some money, but I was a little disappointed that I wouldn’t be able to finish the deck…. Until I was introduced to Thrasios, Triton Hero and Tymna the Weaver! As somebody that had spent a long time trying to figure out what direction to take his Atraxa deck, this partner combination made me very happy, as I was able to take the land base from that, along with a few other cards, and merge it with what I’d got for the Doomsday deck I was working on, to create a four colour Doomsday combo deck! Whilst the deck is perhaps not perfect yet, it’s definitely close to where I want it to be, within my budget, so let’s take a look at what I’ve got, and why!

Well, first off, these 2 fit all the colours we need! Tymna’s lifelink is helpful for keeping you alive whilst finding your combo pieces, but Thrasios is the real Mvp here. His ability allows you to not only scry, but also gain card advantage, which is always fantastic, as it gets you closer to your wincons, or in the case of Doomsday, can actually win you the game! 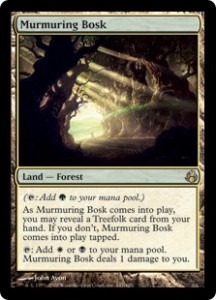 First off, the land base! As you can see, I’ve started to collect together some fetch lands, as well as lands to find with them, such as the shock lands, and Murmuring Bosk. I have found these to be key to playing the deck, as fetchable multi-coloured lands make it significantly easier to get access to the colours you need early on, and given that this is a combo deck, you really want to be doing as much as you can early on! I am currently missing Godless Shrine and Temple of Plenty, but plan to buy these soon, and have them replace a Plains and a Swamp. Fetid Pools is a land I am currently testing, as it is also fetchable, and comes with the added bonus of cycle, which helps enable a win with Doomsday by drawing the first card of the pile. However, it does enter tapped, so it may be replaced by better, faster land in the future! In addition to the various multi-coloured lands in the deck, I also chose to include Reliquary Tower. Whilst colourless, this land allows you to hold as many cards in your hand as you like, without worry of discarding down, and that is a wonderful feeling in a deck running Necropotence and Ad Nauseam, along with a range of disruption and counterspells! 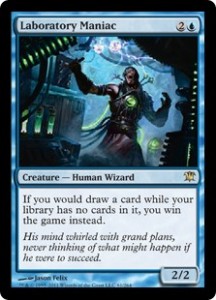 Next up, let’s look at the creatures. Now you may notice there aren’t many of them, and honestly, it’s because we don’t need many creatures to win with this deck. Laboratory Maniac is one of the single most important cards in the deck and often the first target of a Praetor’s Grasp), as his ability turns himself and Doomsday into a win condition. Simply reduce your deck to 5 cards, and then use whatever is at your disposal to draw 6, with Laboratory Maniac’s ability winning you the game upon the sixth draw!

Jace, Vryn’s Prodigy is a wonderful card in this deck, as he not only supplies card advantage and deck thinning, but can be used to help draw into your final cards after a Doomsday! In addition to this, his flip side, Jace, Telepath Unbound has a -3 that enables you to cast Doomsday from your graveyard if your opponents managed to stop it the first time!

The other three creatures: Arbor Elf, Birds of Paradise, and Deathrite Shaman, all serve the same purpose – ramp. Arbor Elf can untap your duals (and Murmuring Bosk) Birds of Paradise taps for any colour, and Deathrite Shaman can produce any colour by exiling the fetch lands in your graveyard, as well as having the ability to grave hate on other people (Much to the dismay of the Sidisi, Brood Tyrant and Karador, Ghost chieftains of the meta)! 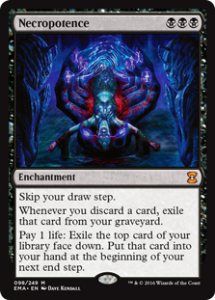 All of the Enchantments in this deck serve the same purpose, and that’s card advantage. Burgeoning turn one is fantastic, allowing you to easily get ahead of your opponents on land, in turn helping you to combo off faster. Rhystic Study and Mystic Remora force your opponents to pay additional mana when they cast spells unless they want you drawing more cards, Phyrexian Arena draws you an additional card every turn for just one life (a cost mitigated by the high life totals of the format), and Necropotence can win you the game if used correctly; if you have it on board when you cast Doomsday and Lab Maniac, simply exile the top five cards of your library with it, and cast any card that lets you draw! 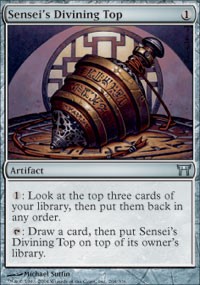 The artifact suite in this deck is almost entirely made up of mana rocks, once again there to help speed you to an early combo win, however there is one card that stands out, and that is Sensei’s Divining Top. This card is one of my favourite cards in magic (and thanks to a recent legacy ban, it’s a lot cheaper now too! (RIP Miracles, gone but not forgotten.)). Spinning the top in response to your opponents doing, well, anything really, gives you great advantage and foresight (and often makes Crazy sigh after a while), and the fact that you can not only rearrange your top three cards, but also swap the top for one of them, is incredible, essentially giving you the opportunity to cast counterspells you didn’t even have! On top of all that, if you tap the top to draw a card when you have no cards in library, Lab Man wins you the game, again! 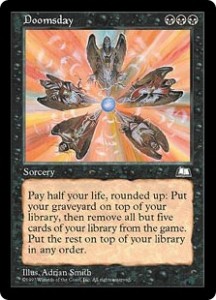 The meat and bones of this list, as I’m sure you can tell, are the Instants and Sorceries. They make up almost half the deck (including land) and allow the deck to do everything it needs to do to win! There are a countless number of draw spells in here, both for advantage and winning with Doomsday, with some of the more important ones being Brainstorm, allowing you to draw 3 cards at once (technically), Gush, which you can use to draw 2 cards without necessarily paying mana, and Gitaxian Probe, a free draw that also lets you see an opponents hand! Ad Naseum also gets a mention here as a card that can fill your hand up, and also help you find your combo pieces! Unfortunately budget restrictions stop the deck from being totally flexible – I can’t justify a Candelabra of Tawnos or Lion’s Eye Diamond at this time – a well timed Doomsday is more than enough to catch an unprepared table off guard!

Regrowth and Noxious Revival both work brilliantly as back-ups if an opponent counters Doomsday, as you can use them to bring it back, and Mystical Tutor, Dark Petition, and Traverse the Ulvenwald can be used to tutor up Doomsday and Laboratory Maniac for the win.

Counterspell, Dispel, Swan Song, Mental Misstep and Negate are amongst a group of counter spells that can be used to protect your combos, and Mental Misstep also has the added bonus of being able to counter someones turn 1 Sol Ring without costing you any mana!

Finally, the list packs a decent removal suite to deal with your opponents threats, with Cyclonic Rift and Hurkyl’s recall bouncing the board (the latter being a meta pick against mana rock tribal decks like Kozilek or Sharuum), Path to Exile and Anguished Unmaking permanently removing the re-animator players threats (Sorry not sorry, Crazy), and Nature’s Claim dealing with any pesky artifact or enchantment based threats!

Ideally, you want to be comboing off before your opponents can stop you! Your early game wants to see some rocks and dorks, as well as something to keep your hand stocked up, followed swiftly by cards to tutor up your combo pieces. An important thing to remember is to keep up enough mana to counter anything that might stop you from winning. In order to truly protect yourself, you should wait until the turn you plan on winning to cast Laboratory Maniac, and ideally you want to be winning the turn you play doomsday. There are entire articles dedicated to what cards should be in your doomsday piles, so I won’t go into primer level detail here, but I often find myself including Brainstorm and Gitaxian Probe, as both are extremely cheap card draw spell, and Brainstorm draws multiple cards. Gush is also one I like to pop in as long as I have 2 islands to bounce to my hand. Day’s Undoing is my most recent addition to the deck, and so I am yet to successfully pull it off (Not for lack of trying – Unmistakable), but casting Day’s Undoing after a Doomsday/Lab Man combo wins you the game on the spot if your opponents can’t disrupt it, as it is a guaranteed 7 draw!

So there we have it, my take on four colour Doomsday! I hope you have enjoyed this little deck tech, and I would love to hear any feedback you guys have, or even deck suggestions that are within a reasonable budget! But until next time, be good to one another, and bye from Yami!