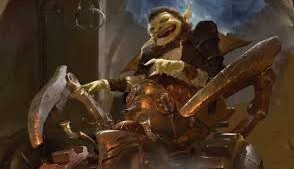 Welcome back, to another edition of Slice of (Colour) Pie! Today, I’m gonna be chatting with the goblin ‘walker himself, Daretti, about the colour combination red/black, also known as Rakdos, in edh! 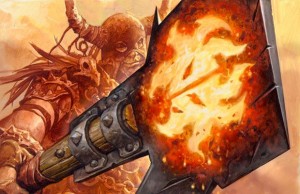 Now Red/Black isn’t exactly the strongest 2 colour combo in commander, and it isn’t lacking in weaknesses, however that doesn’t mean you can’t throw together a deck that can win, and maybe even on a budget! So as always, let’s take a look at the strengths and weaknesses, and what makes Rakdos tick! 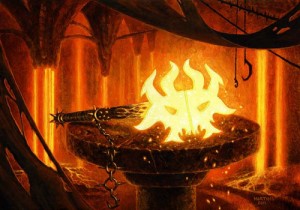 Red/black is a predominantly aggressive colour combination, with plenty of small, fast creatures to attack with, such as Exava, Rakdos Blood Witch (Who screams ‘attack them’). Larger, and still aggressive creatures look more like Dragonlord Kolaghan or Kolaghan, the storm’s fury, who in turn also lend themselves to a more tribal based build. Whilst dragons is a good tribe to run in Rakdos colours, Vampires are also fun idea – Olivia Voldaren even lending herself to an almost control/aggro deck, enabling you to steal creatures.

In addition to simply smacking your opponent, red/black does also feature some disruption, of both your opponents hand and mana base, with modern staple Fulminator Mage allowing you to destroy your opponents non-basics, and cards like Blightning, Pain Magnification, and the flexible Kolaghan’s Command, giving you the ability to make your opponent discard. Removal spells and burn are all over the place in these colours, from Terminate to good old Lightning Bolt, so your opponents creatures shouldn’t be too much trouble, and the burn side can even be used to help close out games!

A stand-out card, and top-notch win-con for Rakdos decks, is Master of Cruelties. This guy has been a favourite of Crazy’s since it was first released, with it’s ability to instantly knock an opponent down to one life, leaving them in range of all manner of instant speed burn spells. Be wary though, as this card can draw some hate from players that don’t have the means to deal with it! While not in pure Rakdos colours, this can be abused by Kaalia of the Vast or Alesha, who Smiles at Death (Who Unmistakable has looked into Here) to allow for two creatures attacking. If both unblocked, the Master triggers first, allowing your commander to outright kill a player! (Blockers are unfortunately necessary in our group. – Unmistakable) 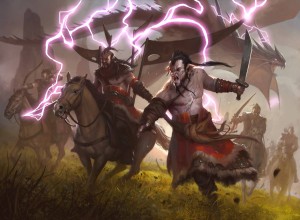 Red/black decks tend to be fast, wanting to close the game out as soon as possible, and whilst there are stax decks out there, it’s lack of long-game sustainability can be a big let down. This is something to consider during your deck building, and maybe take into consideration the meta you play in when choosing which cards make the cut.

This colour combination also lacks a lot in terms of enchantment removal, and I have seen decks in these colours get completely shut down by stax decks that stop them from untapping or attacking. In addition to this, the lack of protection for your own spells (no blue counterspells and no white protection spells) makes keeping your threats alive difficult (although on the bright side, a lot of your creatures don’t die to Doom blade!). Losing your win cons because you couldn’t protect them isn’t ideal, and if your opponents cast a spell you can’t stop, you’re in for an un-fun experience. They can somewhat fix this by being great at reanimation (red only temporarily, but I digress), but it puts an unnecessary kink in your plans!

In short, red and black are usually better when an additional colour is added in, whilst when it’s just the two colours, it just doesn’t seem all that effective in the long run. You need to be able to kill all your opponents quickly, and in a four man pod, the moment you start taking aggressive actions towards other players, you become a target. With little to back up your plays, it’s not uncommon to find yourself falling flat on your face, or being stuck with honourable second! 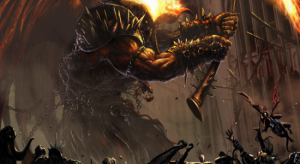 For all its weaknesses, red/black has some cool looking cards, and in the right meta some of these commanders could be a lot of fun (Just maybe don’t take them to a competitive event!)

Exava, Rakdos Blood Witch– Exava likes to hit hard and fast, and she likes to make your other creatures do the same. Unleash is a great ability in her case, as she doesn’t want to block anyway, and it enables a faster commander damage win. It’s just a shame there aren’t that many ways to give +1/+1 counters in red/black!

Kaervek the Merciless– This guy has a high mana cost, sure, but his ability makes combo players think twice! Damage every time they cast a spell? That storm player better watch out!

Kolaghan, the Storm’s Fury– Did someone say dragon tribal? Every time a dragon attacks, everything gets bigger. That’s a separate buff for each Dragon attacking; the more you attack with, the bigger they all get! Your opponents are gonna need more flyers!

Mogis, God of Slaughter– If ever you wanted to play red/black stax, Mogis is your guy (or God). An indestructible 7/5 that makes your opponents sacrifice creatures or discard cards? Sounds good to me!

Olivia Voldaren– Another tribal commander, and this time it’s a vampire! She can make herself bigger whilst killing other creatures, or she can steal your opponents creatures and convert them into vampires (how flavourful!)

Rakdos, Lord of Riots– Can’t talk about Rakdos without mentioning their lord! This guy encourages you to deal damage, by offering a discount on your creatures when you do! It’s almost storm….

Rakdos Charm– Now this card is great. It decimates Splinter Twin players by stealing the win from under their noses, it exiles the reanimator players graveyard, AND it can destroy an annoying artifact of your choice! Talk about multi-purpose!

Kolaghan’s Command– Talking of multi-purpose; Bring back that creature your opponent killed, make your opponent discard, destroy an artifact, or deal a little damage… and you can choose two!

Master of Cruelties– As mentioned above, this guy can win games outright. Your opponent’s life total becomes 1, and it’s not even combat damage so the almighty Fog can’t stop it! Throw this in a Kaalia the Vast deck, and all of a sudden you’re winning on the spot…

So there we have it guys, a quick breakdown of Rakdos in Commander! A deck doesn’t have to be the best colour combination to be fun, and in the right meta a red/black deck could even win games!

I hope you’ve all enjoyed the article, and as always if you have any relevant deck lists or ideas, please feel free to let me know! But for now, its bye from Yami!