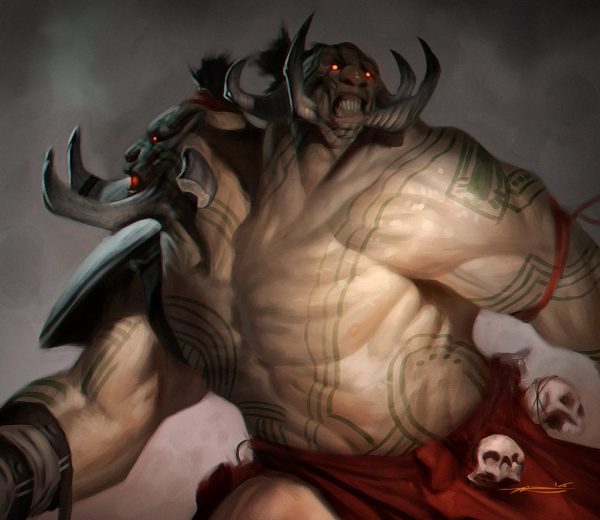 Hi all, Crazy’s back with another requested no-cash commander.

If you’re here for the first time – here I make decks that cost $50 or less for those of you who want to try something different but without the investment of building a full-power deck. This is another one that was spawned from a request in the previous article, but this one is on the complete opposite end of the spectrum – for $49.19 you can have this Ruric Thar, the Unbowed anti-control deck.

I kid, mostly. Smashing face with beefy creatures is certainly an option but we also have some more indirect approaches – For those of you reading along with the decklist up above you may notice a certain Sorcery in the deck that basically reads “I win”. To aid in this there are a lot of ways to increase the damage being dealt out by Ruric, making your spells difficult to counter by virtue of them dying trying. That Sorcery is:

Primal Surge – You may have already noticed that every card in the deck besides this is a permanent. For those uninitiated in the ways of Primal Surge this means that for the minor investment of 10 mana you get to flip your deck upside down and – if they aren’t all already dead from all the damage triggers coming from your enchantments (We’ll go into those in a minute) – turn it sideways. Realistically you’re killing everyone at the table when you play it un-countered. How so? Well there are two major payoffs:

Where Ancients Tread, Warstorm Surge – Good without Primal Surge – But with it you get to mete out a few hundred points of damage overall when each of your creatures enters the battlefield

And the other, of course, is:

Now, we know that we get to drop a lot of creatures off a Surge – but you may notice that many of them don’t have haste. Although I guess that’s not strictly true…

Fervor, Fires of Yavimaya, Ogre Battledriver – …because these will also come out off a Primal Surge, enabling us to turn everything sideways immediately. Ogre Battledriver’s power boost is a bit win-more here but also provides us with some redundancy if we want a haste enabler and some power boost in the early game.

But really, who are the damage-dealers? Lets find out:

Archetype of Endurance – A beef to protect the rest of your beef and helps to deal with those pesky hexproof commanders like Uril, the Miststalker.

Colossus of Akros – The beefiest beef ever to beef (That we can afford). Hella expensive but that’s why we’re in Green – And there’s not much more green than attacking with a 20/20 indestructible trampler.

Artisan of Kozilek – Absolutely crippling if it swings even once thanks to that Annihilator trigger. Doesn’t hurt that it reanimates another fatty and has a 10/9 statline.

Deus of Calamity – An above-average body with a crippling ability to destroy the land of anyone not running enough creatures to block it on a regular basis. Like those control decks we’re trying to hate on.

Greenwarden of Murasa – Gives us back from cards while also providing a body that can’t just be ignored. Excellent card.

Gruul Ragebeast – But we can’t just hate on the control decks, and this guy lets us use the rest of our fatties to keep a firm grip on our domain – the board. Notably this isn’t a may though, so make sure whatever you play can beat something up.

Hanweir Garrison, Hanweir Battlements – The bomb here is it’s flip-side of course, Hanweir, the Writhing Township. Because there’s nothing like a giant, hasty body that makes more bodies. It certainly doesn’t hurt that the land can give other things haste either.

Hoard-Smelter Dragon – A pretty big flyer with a pretty relevant ability, especially when you need to slow down your opponent’s artifact ramp.

Moldgraf Monstrosity – A well-above average body with a well above-average ability. One of my favourite cards for a green stompy deck.

Rampaging Baloths – Another one of my personal favourites. An on-cost body with a well-above cost ability. Has excellent synergy with Warstorm Surge.

Soul of New Phyrexia – Sure are loving our 6/6 tramplers for 6. And this is another one with a powerful and relevant ability, with the additional advantage of being able to be used from the graveyard.

Soul of Zendikar – More 6/6s for 6! But this one can pop out even more bodies – A bit expensive maybe but with it being repeatable it makes an excellent sink if you have some leftover mana.

Terastodon – 3/3s don’t pose much threat to anything you can pump out. As such you can feel free to take out the 3 biggest problem permanents and not worry about the crackback.

Thunderfoot Baloth – Not only pumps your board, but doesn’t provide a terribly small body itself. And considering you want Ruric out already for maximum effect you should probably be able to get away with the Overrun effect provided by this guy with little interference.

You may be wondering (understandably) how we’re summoning half of these things before turn 6/7/later. Well…

Arbor Elf, Elvish Mystic, Llanowar Elves – Pretty standard dork suite. Ideally we drop one turn one and progress from there.

Quirion Elves, Zhur-Taa Druid – Another couple dorks, in this case with benefits.

Burnished Hart, Farhaven Elf, Wood Elves, Sakura-Tribe Elder – A bit more traditional ramp, these ones gives us a land we’ll keep instead of losing mana when we lose the creature.

Drumhunter – Ramp and Card advantage that Ruric doesn’t hate and, in fact, helps out. Great for this deck.

Garruk’s Packleader, Primordial Sage, Soul of the Harvest – None of them have terrible bodies and all of them draw cards. More than acceptable here.

Savage Ventmaw – So if you turn this sideways you should be able to cast that Primal Surge you’re holding. It’s a very powerful ramp ability, but it doesn’t work the turn you drop it without a haste enabler.

Dictate of Karametra – Another great way to cheat in an early Primal Surge, drop it end of the turn before you, then tap out for 10 mana and win t5/6 is the magical dream land here.

Now – No deck can survive without interaction, so we have something to interact with everything:

Acidic Slime – Lets you pop a thing and then rattlesnakes a creature too. All said, a decent card.

Brutalizer Exarch – Can answer a noncreature a bit more permanently than most decks can handle – or tutor up something more dangerous if you need it.

Caustic Caterpillar – It’s a naturalize effect, but one I’d save for a special situation by the name of Torpor Orb if you know it’s a potential threat, since this one doesn’t get turned off by it.

Creepy Doll – Has a different use we’ll go into later but also just works as a decent, persistent rattlesnake.

Daybreak Ranger – Stops people from consistently going over our heads and – when he flips – can provide a good source of ground removal too. Special mention for being able to take out Hushwing Gryff.

Mold Shambler – A little expensive perhaps but it does answer planeswalkers with little problem and you can’t argue too much with that on this budget.

Ryusei, the Falling Star – A boardwipe and an excellent flying threat, nothing wrong here. Just be careful when you play it.

Silklash Spider – Eats flyers for breakfast, and not just one or two at a time.

Tin Street Hooligan – RG for an Ingot Chewer that sticks around. Nothing special but not awful either.

Ulrich of the Krallenhorde – A recent mythic for only a Dollar. Ouch. Still, he buffs a thing then kills a thing, and considering we’re putting some decks off of casting much at all we should be able to flip fairly regularly.

Ulvenwald Tracker – You should have the biggest creature 90% of the time. This guy lets you use that as repeatable removal.

Arena – See above, but only use it if you actually have the biggest creature.

You may recall I mentioned that this was an anti-control deck. You may be wondering where that is. Well:

Dictate of the Twin Gods, Furnace of Rath, Gratuitous Violence – Play this deck a few times and you’ll come to notice people don’t like playing noncreatures with your commander about. Let’s keep it that way by doubling up on the punishment.

Possibility Storm – Downside: You can’t Primal Surge with this down. Upside: Everyone just got a lot less consistent, but being on the board makes you a lot less vulnerable to that. Also means your opponents have to doublecast on all those noncreatures, taking extra punishment from Ruric. Worth noting that people can still cast from the command zone with this down, including you.

Grafted Exoskeleton – A damage-doubler on crack. One other doubler + this on Ruric means that anyone who casts a noncreature dies on the spot.

Pariah’s Shield – Now this is a special piece of tech that’ll save you from your own commander. Just whack this on an indestructible creature and suddenly your all-important damage doublers, haste enablers and Primal Surge just became pain-free.

Dosan the Falling Leaf – This literally does not affect you. But it does make all of your spells immune to counterspells, instant-speed removal, etc. as well as turning off instant speed card draw a la Dig Through Time.

Hermit of the Natterknolls – Will probably flip with Ruric out, and even if it doesn’t you get to benefit from every spell someone tries to hit you with on your turn.

Spearbreaker Behemoth – Blanks your opponent’s removal when they try and hit the source of all their problems (Spoilers: It’s your commander)

Spellbreaker Behemoth – All of your bombs just got uncounterable with an above-cost body. Great card.

Wrecking Ogre – A (mostly) uncounterable combat trick that’ll push Ruric into almost one-shot territory without any other boosts. Punish them for thinking they had a turn.

Rogue’s Passage – Stops people from killing Ruric in combat – A real concern when he has to attack every turn.

And apart from that it’s just land – I’m not going to go into this too much but we did a lot better than I thought we would on a budget. Speaking of which – How would we do without one?…

Speaks for itself for the most part – We’re a big, angry Gruul deck, we always want bigger, badder creatures.

Normally I probably wouldn’t include this sort of thing in here but getting Ruric out as soon as you possibly can is critical to the anti-control portion of the deck and popping out a Primal Surge as early as possible too – and it doesn’t hurt to be faster than the other creature decks either.

What else are we playing this deck for if not to give a big, fat middle finger to Blue players everywhere? These cards will help you do just that.

And there it is – A great deck that should steal a win or two at any spell-heavy table for such a small investment. Did you love this? Hate this? Think of something I missed? Let us know over on Facebook or down in the comments below – Remember, we’re always looking for new ideas!