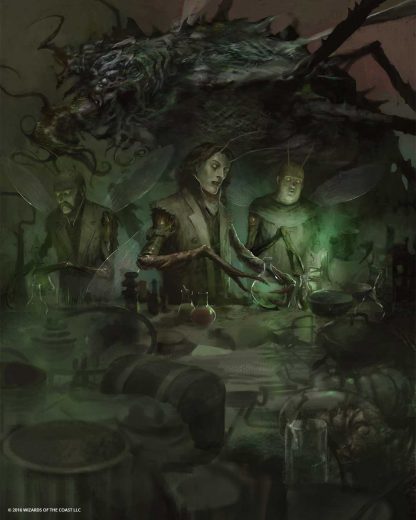 Hey, Dr Jank here back from our short break of actually quite a while, anyhow Eldritch Moon is almost upon us and the limited environment is looking pretty spicy, so here are my top red/colourless/multicoulored cards to look out for at pre-release this weekend 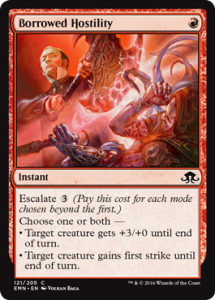 Borrowed Hostility is one of the new “escalate” cards, if you aren’t familiar with the new mechanic it’s kinda like entwine but the rules text looks better and you can have more than one extra mode selected. It’s a unique new mechanic. What makes borrowed hostility so fantastic is how versatile it is as a combat trick, early game you can make unexpected kills (preserving your creature) with the first strike mode, mid game you can make favourable trades with the +3/+0 mode,  and you can even do both at the same time if you fancy throwing 4 mana in, which in sealed really isn’t much of an issue 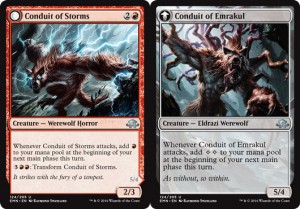 This is a pretty interesting card, it’s a 2/3 for 3 which isn’t a particularly amazing body but what it does do is provide some ramp potential in Red. it also serves as a way to put the extra mana to use without using additional cards, in an ideal world you play this turn 3, attack on turn 4, and flip it for 5, this nets you a pretty tasty mana boost for dropping bombs with. I can see this working especially well in some sort of R/G setup. 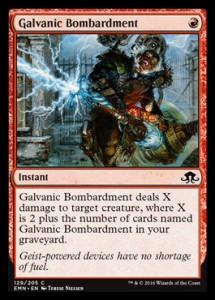 This is a card I’m pretty excited about, not only in limited but in standard too (more on that in an upcoming Jank Bank). Dealing 2 damage to a creature for R is pretty reasonable on its own but if you’re lucky enough to get more than one of this bad boy then you can maybe deal 3! You can use it effectively as early game removal and later on in combat to help deal with bigger creatures. It’s pretty much fiery impulse and that’s nothing to scoff at in limited. 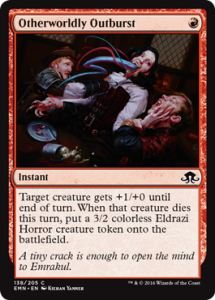 Now this card has got to be my absolute top red limited card. I would classify this as a solid “ridiculous”. It allows you to potentially make a favourable trade AND put a 3/2 on the field, with a casting cost of just R this is tempo madness. There’s not really much else to say about this card except for “mental”. 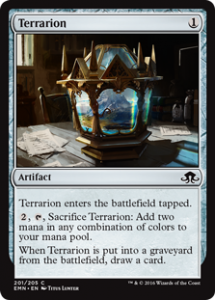 Terrarion is interesting, it serves as both color fixing and a very slow cantrip, if you’re planning on running a more adventurously coloured deck like Bant (The Tamiyo Dream) then Terrarion is going to be invaluable in making sure you don’t get screwed. 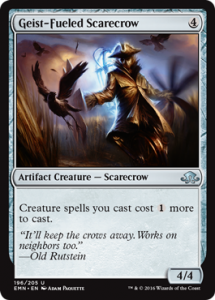 On the surface this card doesn’t seem too amazing, however being colourless it can slot into any deck that needs to flesh out the midgame.  I don’t think this card is particularly strong on its own but it could be used very effectively to prop up a deck in desperate need of creatures. 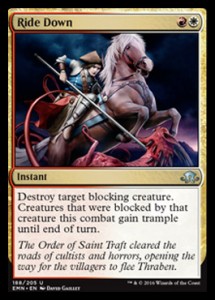 Picture the scene. You’ve finally got out that spicy bomb you were so happy to open. You’re trying to put pressure on the opponent but they keep chump blocking with a seemingly endless pool of tokens. You know that if you get your creature through then you have surely won the game. Then you topdeck it. Ride Down. They chump and proceed to get fully annihilated by the spicy meatball that can suddenly assign all of its damage directly to face. Yeah This card is pretty cool I think, pretty good finisher. 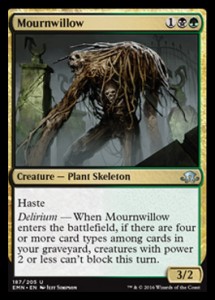 This card is another one that I would put under “Good Finisher”, but this one works for the going wide strategy. Inevitably a lot of sealed games end up stalling out with both players having a line of creatures that don’t overtly overpower eachother and it’s a big hassle and it takes forever, Mournwillow allows you to make chump blocking an impossibility and when you swing with everything the opponent either has to take the damage or make some bad trades.

Hope you enjoyed our 3 part limited roundup of the set, best of luck to everyone at prerelease, may all your pulls be unholy.