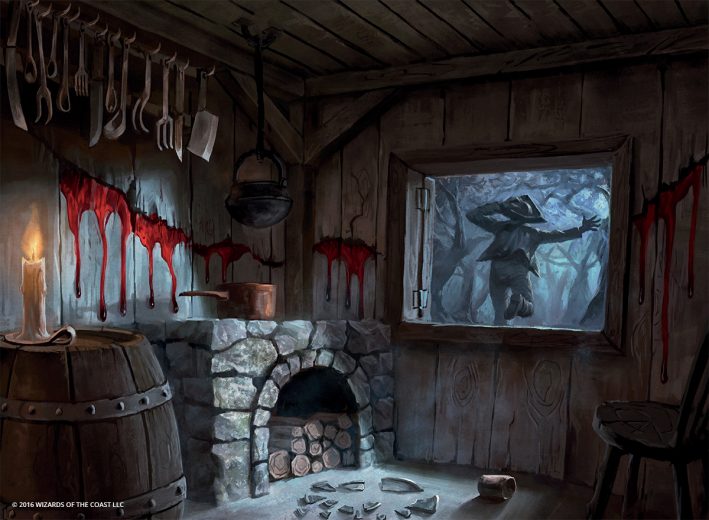 Hello there and welcome to the first installation of the Jank Bank, where we take the meta and completely disregard it, all in the name of jank! 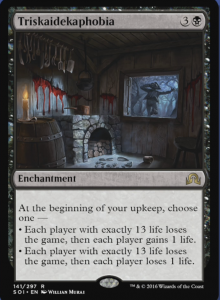 This week I’m going to be tackling Triskaidekaphobia, a card that may well be one of the best cards ever printed. Some people have tried to convince me otherwise, saying things like “You probably shouldn’t base your entire pre-release deck around that one rare” and “Were you born backwards?”. Well this is what I say to them; With Triskaidekaphobia you only need to get your opponent to 13 health as opposed to 0 without it, and 13 is a much bigger number than 0, therefore a deck with Triskaidekaphobia is better than one without. It’s basic logic.

A lot of people wanting to build around Triskaidekaphobia would instinctively build a hard control deck with Trisk as the finisher, however, that sounds pretty boring to me so behold the glorious control burn wonderchild!

Triskaidekaphobia – come on, you know why this card is in the deck.

These instant spells are pretty straightforward to know when to use, I won’t insult your intelligence by going to deep into these. 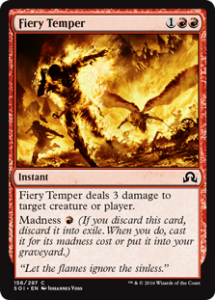 Fiery Impulse – This card is pretty good for clearing out early minions and shutting down early game strategies.

Fiery Temper – This card is primarily going to be used to deal damage directly to the opponent, preferably paid for with the madness cost.

Lightning Axe – Lighting axe is pretty good at taking down fatter minions and is a 1 mana madness enabler.

A big challenge in playing this deck is getting the opponent to exactly 13 health, to make it a bit easier there’s some X burn. 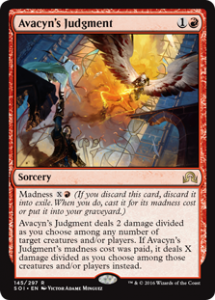 precision needed to take down the opponent, or late game can be used as a mana sink to take enemies down from high health in one turn.

Burn from within – X burn without having to have a discard outlet is very valuable in this deck, it’s slightly less versatile than Avacyn’s judgement but still gets the same job done effectively. 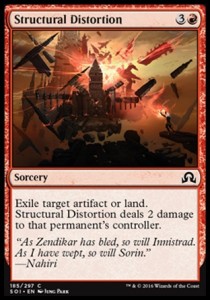 This may seem a little strange but we are in fact running mainboard land destruction, this is because in a format with access to painlands getting an opponent to stick at 13 health can be very difficult if they can ping themselves for 1 at will.

Structural Distortion – pretty standard cost for land destruction however we have the added bonus of burning the controller for 2 and also exiling the land, which may not seem like a big deal but with delirium knocking about the format it might be the slight edge we need.

Languish – this should be fairly self-explanatory: they go wide they get dead.

Painful truths – with the discard outlets and cheap spells in the deck we may find ourselves low on cards, and that is where Painful truths comes in, despite being a Two-colour deck we also have access to which to draw 3 off this bad boy.

Heir of Falkenrath – this is a pretty good discard outlet for our madness cards and in a worst case scenario can at least block. 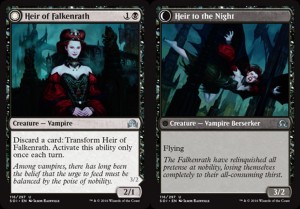 The mana base should be fairly simple to understand – two colour lands for out two colour deck, however we’re actually running Battlefield Forge and Caves of Koilos, this is because the almighty Trisk is a double edged sword we must be very careful around if we are to stay alive, the ability to ping ourselves for 1 is incredibly important when the opponent thinks he is being smart by getting us down to 13, white also lets us draw an extra card from Painful Truths.

Obviously the main strategy here is to get the enemy down to 13 life and win, in an ideal world we would swing with an Heir of Falkenrath on turn 3, discarding fiery temper and knocking them down to 14, we would also have enough left over mana to use our X burn to get them down to 13 exactly. Next turn we play Trisk and just stay alive to win at the beginning of turn 5, easy right? But what if we aren’t living in magical Christmas land? what if we don’t even have a Trisk in hand? Well then we can switch to the backup plan of desperately trying to burn them out before they kill us, which does actually work sometimes.

In conclusion this deck isn’t actually that bad, you win some you lose some, like all jank really.If you have any thoughts on the deck I would love to hear in the comments.