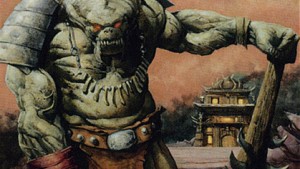 In this series of articles I’ll be putting together some interesting decks that can be done by a person on a budget. That budget? $50 on TCG. That is less than 50 cents a card and less than £30 total. I’ll also be putting a note on the end with some definite improvements that could be made were we not working with a budget. I also make no guarantees that the price won’t go above $50 at some point.

So without further ado, I present your new best mono-red friend – Heartless Hidetsugu.

This big angry dude is gonna help us kill everyone at the table except you with the addition of just one damage doubler.

“But Crazy!” I hear you say “Won’t he kill us too?”. The answer is yes, Hidetsugu takes no prisoners. Which is why we also play a lot of ways to defend ourselves – although if worst comes to worst we can always just force a draw.

The combo at it’s basest only needs 3 pieces.

Dictate of the Twin gods, Furnace of Rath – Straight up global damage doublers, by far the simplest to use if a table needs-a-killin’

Gratuitous Violence – Repeat after me: “Symmetrical damage doublers are amazing”

Curse of Bloodletting – See above, but with more “Screw THAT guy in particular”

Bitter Feud – The most difficult damage doubler to use properly – works the same as the above but you better kill the guy that turn before the crackback.

Overblaze – Both the best and worst damage doubler in the deck. Worst because it means there’s much more of a mana investment on the turn you go off. Best because they can’t blow up the enchantment in response to you cracking Hidetsugu.

Grafted Exoskeleton – Honorary Damage doubler – although requires some pretty specific survival cards since unless you prevent the damage outright or are below 20 life it’ll kill you too.

Dark Sphere – Halving the damage you take isn’t ideal unless you’re killing everyone straight up off this, which is very much offset by the fact that it’s totally free so you can break it out of nowhere before your opponents think you’re set up.

Lich’s Mirror – This is your emergency damage prevention, if you’re forced to use this before everyone else is dead you might as well pick up. On the other hand it’s definitely the best insurance against people trying to mess with your other means of survival to force a draw, since they won’t be able to.

Loxodon Warhammer – Some of you may have noticed that Hidetsugu deals damage when he uses his ability. The hammer turns his ability into “Steal half of each player’s life” – Or all of it with a damage doubler.

General’s Regalia, Pariah’s Shield – Stick either of these on one of your creatures and stop worrying about that Hidetsugu hitting you until the creature’s dead. For bonus points can also be stuck to Hidetsugu himself or Stuffy Doll.

Pentagram of the Ages – Like Dark Sphere but requires some setup. Does prevent ALL of the damage to you however.

Soul Conduit – Opponent on an Odd life total to live out the storm? Not anymore with this handy Conduit.

Fortune Thief – One of my favourite cards in this deck, basically reads “I don’t die” as long as he’s around. Bear in mind he’s very fragile and not hard to kill while the Hidetsugu ability is on-stack.

Treasonous Ogre – Best card in the deck. Can set you to an odd life total while also accelerating you straight to victory. No reason to ever cut this from a Hidetsugu list.

Glacial Chasm – Damn good job we don’t need to attack because this lets you tap your commander with impunity!

In almost any combination – one card from each section should win you the game on the spot. Thing is we also need ways to stop people interrupting the combo – so here’s a section of things that either speed up the combo or generally protect it. Note that a lot of the things from the survival section also fit in here (Treasonous Ogre for example) but I won’t be repeating any cards.

Haste lets the combo happen the turn Hidetsugu lands – basically turning off all of your opponent’s sorcery speed boardwipes and removal.

Swiftfoot Boots – Not just Haste, but also Hexproof? Sign me up.

Ashling’s Perogative – Haste for Hidetsugu and taps down half of the other creatures that come in. Just keep in mind that it’s a fully symmetrical effect.

Anger – Takes a little more work to get online but requires far more specific hate to get rid of once it’s up.

Expedite – 1 mana to haste and draw a card. I see no problem here.

Has a lot of crossover with the survival section here – but we also need some things specifically to protect the big guy until he’s ready to fire.

Magebane Armor – Stops Hidetsugu from dying to any red boardwipes. Mostly your own.

Smoke – For the main plan we only need one creature to untap anyway meaning we laugh at this.

And then there’s the glue that holds the whole deck together.

Tutor in Red? On a budget? It’s more likely than you think.

Ring of Three Wishes – The premier budget tutor for all the colours that don’t get tutor. Fair bit of a mana investment but there’s not much other choice for tutor in Red. Could potentially be replaced with Tamiyo’s Journal for less consistent tutor but more utility on the same budget.

Burnished Hart – Personally there’s not much reason to not play this card. It’s just good ramp.

Hoarding Dragon – You may have noticed that a lot of your best cards are artifacts. This lets you tutor for artifacts. Just beware of Path to Exile, it’ll ruin your day.

Faithless Looting – Churns you through some of your deck. Twice!

Incendiary Command – Does a bit of everything really, pops your opponent’s best land, cycles all the hands, busts a bunch of tokens or even finishes off that one guy who was on an odd life total!

We’re in mono-red combo and don’t want to be overrun, so yeah we’re going to be running a fair bit of removal.

Steel Hellkite – Needs to make contact with the opponent’s face but honestly who cares? You manage it and you can blow up whatever you want.

Tyrant’s Familiar – A little underwhelming normally, but if Hidetsugu is out at the same time he swings 7 in the air with haste and pops your opponent’s best creature too!

Viashino Heretic – Opponent trying to play powerful Artifacts like Caged Sun or Spine of Ish Sah? This is how you punish them.

Arcbond – Worst case scenario this is probably a defensive boardwipe. Best case? Stuffy doll with Pariah’s Shield for infinite damage to everything that isn’t you.

Impact Resonance – One of my favourite cards to go with Hidetsugu. Turns any Hidetsugu tap into almost a one-sided wipe as well.

Smash – Cantripping Shatter. Nothing wrong with this.

Devil’s Play, Red Sun’s Zenith – A whole bunch of damage that can also be used to finish someone off. Many times.

Molten Disaster, Earthquake – Ground-Based Boardwipes leave our dragons alive should we be on plan B and also deal a bunch of damage with a doubler up. Good plan C if you have some damage prevention down.

Mizzium Mortars – Medium sized removal or a medium boardwipe that doesn’t hit you. Just a good card in general.

And now for the best of the rest.

Illusionist’s Bracers, Magewright’s Stone – Double up on the Hidetsugu pops per turn. Great fun with either Lifelink or Glacial Chasm

Thornbite Staff – Besides auto-equipping to Hidetsugu, also allows you to deal with the guys on an odd life total so they have one left post-combo.

Darksteel Myr, Darksteel Sentinel, Vulshok Refugee – Between the three they’ll survive whatever boardwipes we throw down and – more importantly – Are basically free targets for our damage redirect effects since none of them can die to damage from Hidetsugu.

Stuffy Doll – Special mention for being one of my favourite cards in the game. Does all of the above as well as passing off all that damage on to the poor sap you target.

Embermaw Hellion, Fire Servant, Satyr Firedancer – Just increases the efficiency of all of your removal or can potentially even let you close out a game where you might not have been able to. A note on the hellion – will make people on odd life totals die to hidetsugu – including you.

Word of Seizing – Can literally win games by itself. Or even better, by virtue of it being instant-speed, can simply save your ass thanks to the blocker your opponent kindly donated.

Mountains. Almost entirely. The only other lands in this deck are the Glacial Chasm and Flamekin Village, those both being useful combo pieces.

And that’s it. The plan for the deck should be self-evident by this point.

Of course if that doesn’t work you just shift to the beatdown/burn plan which is also built in to the deck.

Got a bigger budget?

Maybe you want to spend a little more on this deck? Here’s a few places I’d start.

Platinum Emperion – Another way to ride out the Hidetsugu, but also protects you from your “Earthquake” effects and has a pretty big booty for defence.

Lightning Greaves – Goes well alongside the Swiftfoot Boots, another great piece of protection

Basilisk Collar – The other best way to give Hidetsugu lifelink, which is pretty bonkers.

Valakut, the Molten Pinnacle – You’re in mono-red, so you should probably run this if you have the cash.

If you end up building this or have any other recommendations feel free to let me know how you find it in the comments below!