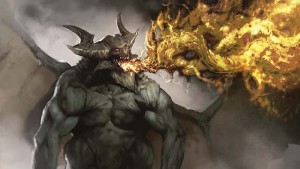 Hi all, Crazy back with one of the meaner no-cash articles we’ve seen so far.

Do you enjoy it when your opponents can’t do a lot of anything? Are you a big fan of playing Archenemy without the Archenemy deck? Do you personally identify as a “That Guy”? Well have I got a list for you. clocking in at $49.41 we have Malfegor – Half Demon, Half Dragon, All hand control: 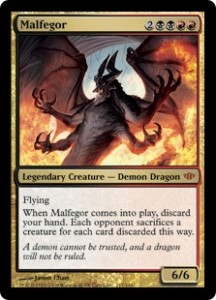 You discard. They discard. We discard. The difference being that we’ve got a deck full of cards with Madness and Hellbent on them and they probably don’t. The win-condition once we’ve got that far is a suite of effects similar to The Rack to drain our opponents to death with some hellbent-fuelled beatdown to close the game out. So lets show off the most important things first – The hand attack:

Getting Out of Hand

Bog Witch – A pretty strong dork that puts us up 2 mana per turn in exchange for a discard. It’s super good.

Cunning Lethemancer – Keeps everyone discarding on a regular basis as long he sticks around. Advances the plan of keeping everyone’s hands low while enabling our own madness shenanigans.

Gnat Miser, Locust Miser – Not exactly straight discard but it certainly helps keep hands down in the face of heavier draw like Consecrated Sphinx and Sphinx’s Revelation

Hellhole Rats – Drops a card from someone’s hand and if they don’t have a land they want to drop also gives us a bit of damage, as well as being a body.

Herald of Anguish – A beefy body that advances the plan to make our opponents discard that can be ramped out by any of our artifacts. An absolute all-star in this deck.

Jagged Poppet – Probably the most high-risk high-reward card in the deck. Someone nails it with a Blasphemous Act and you’re the only one losing your hand. Slam someone when you’ve got an empty hand and an Anthem of Rakdos down and their hand is totally gone.

Nezumi Shortfang – Repeatable discard on a dude who then flips into Stabwhisker the Odious – A rack effect when we most need it.

Putrid Imp – A free discard outlet for enabling our madness shenanigans while providing a body for blocking or poking. It’s pretty fine.

Rakdos Augermage – You need to be careful when you use this, being a 2-way Thoughtseize effect that hits lands, but used at the right time you can be losing next to nothing while stripping an opponent’s best card every turn.

Sire of Insanity – The quickest way to paint a target on your head in my experience. One go around the table ensures that everyone drops their hand like it’s hot.

Stronghold Rats – A mostly unblockable threat that keeps everyone discarding at a pretty reasonable click.

Bottomless Pit – Almost Cunning Lethemancer, but more difficult to remove and the discard is random, which has it’s benefits.

Brink of Madness – Misery loves company, and this makes sure that if you have an empty hand at least one of your opponents is going to be rather miserable when they lose their hand along with you.

Gibbering Descent – Another card that keeps everyone discarding, along with losing a little life each turn too. And once you’re Hellbent you don’t even take the life loss.

Nihilistic Glee – A discard outlet, minor life drain source and a card draw engine. Not amazing at any of those things but extremely flexible.

Oppression – As you may have noticed, Oppression is a symmetrical effect. Which makes it totally balanced right? Much like Armageddon and Winter Orb.

Pain Magnification – Whenever any player suffers a Lightning Bolt, they drop a card. The best part being that you don’t even have to do that damage, it can come from anyone. Major political points if you can have your opponents infighting with this on the board.

Painful Quandary – Almost an asymmetrical Oppression. Almost in that they can choose not to discard but 5 life per spell is rather hefty.

Rix Maadi, Dungeon Palace – Repeatable discard on a land is pretty great, even if it is symmetrical. We don’t super care about discarding ourselves so whatever.

Rakdos’s Return – For that one guy who just refuses to run out of cards or that pops a fat draw spell after you were locked in, this is a big way to return them to their hellbent status.

Skull Rend – Mind Rot and Shock each opponent. That’s close enough to “Blightning each opponent” that I’m more than willing to play this.

Syphon Mind – Pretty disgusting at any phase of the game provided you’ve got enough opponents to still make use of it. Take note of the fact that this does nothing if your opponents are already hellbent though, so try and drop it when you can.

Malfegor – The fastest way to get Hellbent for fun and a considerable amount of profit. if you’ve still got a reasonable amount of cards in hand this is close enough to a 6/6 flying boardwipe that I am proud to call Commander.

So that’s a lot of ways to make things get a little out of hand (Heh). But “what’s in it for us?” you may rightfully ask. Well allow me to tell you…

Being Hellbent for Dummies

Archfiend of Ifnir – So whenever we discard all the creatures we don’t control get stuck with some -1/-1 counters? Hell yeah. And he’s a 5/4 flyer? Double Hell yeah.

Bloodhall Priest – a 4/4 body is fine, and if we’re hellbent we get to shock something each swing too. As if that weren’t enough, it even comes with a nice Madness discount.

Gobhobbler Rats – 2/2 for 2 being the failcase is fine. 3/2 that regens for only one mana is a pretty strong best case though that blocks like a champ.

Grave Scrabbler – If you had to cast this for full cost things went super wrong. Cast for it’s Madness cost though you not only get an on-curve 2/2 for 2 but it comes with a disentomb effect.

Rakdos Pit Dragon – Oh yeah I love this card. Anything that can pick up Evasion, Double Strike and Firebreathing at the same time is a pretty damn great card in my book.

Slithering Shade – Before you’re hellbent, this blocks like a champ. When you are hellbent it loses that Defender downside and hits for silly amounts of damage.

Anthem of Rakdos – Probably the strongest beatdown finisher in the deck, providing +2/+0 to all of our beaters without hellbent, and with hellbent also functions as a Gratuitous Violence. It’s pretty crazy.

Faith of the Devoted – Adds 2 damage per opponent onto each discard for a relatively minimal mana investment. A surprisingly strong card considering it’s a recent uncommon that was basically a draft plant.

Crypt of Agadeem – Turns all of that discard of ours into ramp by dumping all of our creatures. It’s no Coffers but it’s pretty great here.

Twinstrike – 5 mana double kill. Pretty excellent if you can swing it while Hellbent.

Call to the Netherworld – If you discard it you get a free Disentomb. It’s pretty fine whether it’s cast or freebie’d.

Demonfire – Banefire while hellbent, and still a hard burn spell either way.

Ichor Slick – Pretty damn flexible. Can just be cycled, can just be cast, can be madness-cast and hell, can be cycled INTO a madness-cast. Does a lot for a card which only really reads “-3/-3 a dude”.

Psychotic Episode – Drops a problem into the bottom of your opponent’s library where it can’t hurt you any more. It even gets cast on the cheap from a discard.

Stitch Together – With Threshold active this is practically an Animate Dead without the restriction of being an Aura. Probably not worth casting before that though since it’s just an overcosted Disentomb.

So those are all the benefits of us dropping all of our cards. But what about the benefits to us of keeping our opponent’s hands empty? I mean besides them not being able to play cards:

Fate Unraveler – So it’s not strictly related to them discarding, but does give us some punish ability if our opponents try to reload after we empty their hand.

Sangromancer – Provides us with a strong source of lifegain as long as we can keep folks discarding and dying.

Quest for the Nihil Stone – Considerably easy to activate, and absolutely devastating once it’s online. 5 damage per turn is nothing to sniff at as long as we can keep the opponents hellbent.

Shrieking Affliction – Less damage than the quest above but still does a more than considerable amount of damage.

Waste Not – A stupid amount of benefit on top of what we were doing anyway. Paired with something like Delirium Skeins this generates such a silly amount of value there was no way I couldn’t put this in.

Pauper’s Cage, Wheel of Torture – A Rack effect and a flat damage effect as long as we keep our opponent’s hands low, but much harder to remove because they don’t have legs. Both pretty sweet deals.

Asylum Visitor – Gives an extra card each turn for each person we keep Hellbent. It’s a pretty great deal that just puts us further and further ahead.

Blood Scrivener – See above, but only as long as we’re hellbent. You can probably use 2 cards a turn right?

Avaricious Dragon – At least I hope you can since that’s what this guy’s putting out. Conveniently also returns us to being hellbent for free at the end of each turn.

Diabolic Tutor – Basically a free topdeck since it lets us find the exact card we need, when we need it.

Geth’s Grimoire – The emptier we keep everyone else’s hand, the fuller ours becomes. It may be the best card in the deck when we can empty ours on a whim from the command zone.

And what’s left is the utility and ramp to tie it all together:

The Best of the Rest

Everlasting Torment, Sulfuric Vortex – The rest of the card may as well be flavour text, the bit we’re interested in is “No Lifegain”. This stops our opponents from racing our Rack effects out of kill range.

Rakdos Charm – Maybe my favourite card in existence. As I may have mentioned in previous no-cashes involving this card, this hoses Reanimator decks, Artifact decks and Twin decks equally, that last one often in a very lethal way.

Terminate – A great name on a great card that happens to do exactly what is said on the tin. Very well at that.

And that, Ladies and Germs, is the deck. I’ll go ahead and reiterate the warning from the start that this deck is likely to attract some ire at a casual table. Should you be okay with that and are in fact looking to turn up the pain, have I got some cards for you:

A nice little grab bag of ways to discard and things to do with it. Big Game Hunter provides us with some removal on discard. Mindslicer and Necrogen Mists give us more ways to keep the discard going. Infernal Tutor gives us extra ways to tutor more answers while Hellbent and The Rack is… well there’s a reason they call them “Rack Effects”.

Most of these cards should probably speak for themselves as cards you’d want to put in a deck to improve it – They’re pretty much all the best at what they do.

And there it is, one deck guaranteed to turn a table on you pretty quickly. I hope you can talk your way out of a beating. Love the deck? Hate it? Leave us a comment below, or send it straight to us over on Facebook or Instagram.