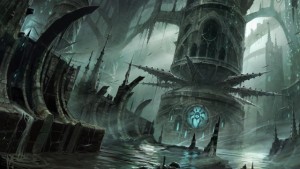 Hey guys, welcome back to another edition of Slice of (Colour) Pie, where we check out the colour combinations of magic, and how they fare in commander! This week, we’ll be taking a look at the fun colour combination of blue/black, enjoying some boneless chicken with Tezzeret! 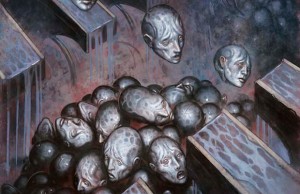 Dimir is an interesting colour combination; Black gives access to some great creature removal, with everything from Murder to Slaughter pact on the list, as well as Black Sun’s Zenith to get around indestructible creatures, and blue is filled with card draw spells for advantage and counter spells to disrupt your opponents, making this colour combo pretty darn good for control!

In addition to control, this colour combination is also great for Zombie tribal, with new heavy hitter The Scarab God now on the scene, as well as Gisa and Geralf, and Diregraf Captain (and Im sure Unmistakable will give us a deck tech of his The Scarab God deck some time soon! (Maybe I will! – Unmistakable)).

As well as Zombies, Wizards of the Coast are giving us a Blue/Black/Red Wizard deck in the upcoming commander 2017 set, so Blue and Black Wizard tribal could also become pretty powerful!

Finally, Black/Blue has some great mill options; whether you’re looking to mill out your opponents, or maybe throw in some green and mill yourself in a re-animator deck headed by Tasigur, The Golden Fang or Sidisi, Brood Tyrant, the cards are definitely there; I even remember my first ever pre-release promo being a Dimir mill card, my old friend Consuming Aberration!

Whilst this colour combination is great at killing creatures, it has a much harder time dealing with other permanents, such as artifacts and enchantments (with much of the removal for these being in white and green), and the lack of green also greatly reduces the amount of mana ramp available! Also, whilst being a great colour combination whilst added to a third (or even fourth) colour, blue/black on their own don’t have many incredible generals; Whilst they aren’t necessarily bad, there aren’t any top tier Dimir commanders either (except perhaps Oona, Queen of the Fae! (or The Scarab God. Hmmph. – Unmistakable))

Potential Commanders and other staples 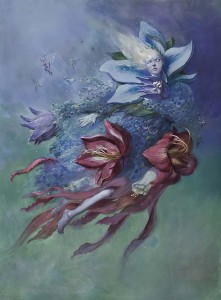 This will be a long section today, due mostly to the various different options available to blue/black that can be built around!

Oona, Queen of the Fae– Let’s start with the big one. Oona is great for a control deck, as a 5/5 flyer that also makes 1/1 flyers, whilst exiling cards from your opponents decks (and that’s important as they can’t get those cards back!). Her ability also makes a good mill general, giving her some versatility! She is often the go to for a UB combo general, due to her deck exile ability pairing very well with infinite colourless mana. As such, when against this general, watch for obvious combo pieces such as Rings of Brighthearth, Deadeye Navigator or Power Artifact, which may tip you off to the type of monster you’re playing against!

Dragonlord Silumgar– This guy also has a decent toughness (as well as flying and deathtouch), which is important because of his ability, allowing you to gain control of a creature or planeswalker for as long as Silumgar is on the battlefield. This makes him an interesting commander because if your opponents do kill him, not only can you recast him but you could also choose a different target, making him awkward to play against! It also makes it difficult to put planeswalkers with him in the command zone, as he could very easily swoop in and take that game winning ult for your own ends!

Gisa and Geralf – These two are great as a commander if you’re running zombie tribal; the ability to cast a zombie from your graveyard every turn? Yes please (also brings me back to my earlier point about self-mill)! These guys pair nicely with mass mill effects like Dreamborn Muse, or even turning Jace, Memory Adept of the edgy hair on yourself to fill your yard quickly and add options to your toolbox lightning fast!

Phenax, God of Deception– This guy is great as the head of a mill deck, not only is he indestructible, but he turns all of your creatures into mill sources! I’ve also seen him at the head of wall decks, as the high toughness in a fairly defensive colour combination is notable. Ever seen a guy get killed by a Wall of Frost? I have. It’s beautiful.

Silas Renn, Seeker Adept – A partner commander! This means you can have him and someone else as commanders! He is also really cool if you want to run an artifact deck, allowing you to cast artifacts from the graveyard! He allows you to play an eggs strategy similar to sharuum with up to 4 colours (or as low as 2 with just him at the helm!) And keep churning out that value until you bury your opponents!

The Scarab God – The new kid on the block, The Scarab God is Unmistakable’s newest commander. This guy has loads of synergy with zombie tribal, allows you to scry every turn, AND gets around commander tax with its graveyard-to-hand recursion ability! This guy puts a sizeable clock on opponents with his life loss ability, and his Eternalise ability makes him really good for denying reanimation targets or using symmetrical reanimation effects, like Living Death!

Notion Thief – This guy is a fantastic include in many decks. His ability to cut off your opponents whilst also drawing you cards is great, helping it fit quite nicely in storm decks and Doomsday decks! A risky pick but well rewarded in Nekusar, this guy can easily lock your opponents out of hands with something such as Windfall!

Whispering Madness – This goes great with Notion Thief, funnily enough! A repeatable wheel effect thanks to cipher, whilst also being easy to pick up (one of the easiest pickups on this list, being a bulk rare from Gatecrash)! Strap this beauty onto one of dimir’s many evasive creatures such as Vendilion Clique or Ghastlord of Fugue (or even double strike through equipment like Grappling Hook or Fireshrieker) and watch the chaos unfold!

Mind Funeral – This is a simple card, but I love it. 3 mana to make target opponent mill until they find 4 land? Beautiful. This is a useful card to punish greedy ramp decks that tear the land out of their deck, or low to the ground decks that run low on land count – especially when combined with a graveyard denial tool like Grafdigger’s Cage or Bojuka Bog!

Lim-Dûl’s Vault – Did somebody say combo staple? I think they did. Index over and over again until you have 5 cards on top that can win you the game? Yes please! Both Unmistakable and myself use this to great effect in our decks (he in Sharuum ad nauseam combo, myself in Doomsday) as a cheap (manawise, mostly cheap healthwise) way to find that last combo piece to help you get there! I feel it’s often underrated, but this is a powerful tool for people scrambling for combo pieces!

Clutch of the Undercity – A slightly more obscure card, but I like this a lot! It’s instant speed to bounce something and cause life loss, but it also has transmute, allowing you to tutor for a 4 cmc card to hand! Transmute is an insanely powerful mechanic exclusively available to Dimir cards (such as Dimir House Guard, Muddle the Mixture, and Dizzy Spell)

Glimpse the Unthinkable – Another great mill card, nice and simple; 2 mana to make someone mill 10! While this is picking up popularity in modern due to the printing of Fraying Sanity, this is also popular among casual crowds for it’s synergy in mill decks (it gets pretty nuts with Undead Alchemist, especially when combined with Altar of the Brood, but that’s a story for another article)!

Perplex – another transmute card, this time a 3cmc one; Counter target spell unless its controller discards their hand, sounds pretty cool to me! This really shines in the topdecj war when every card counts; you either take a card from your opponent, get an unconditional counter, or go and search for something completely different (in Oona for example, her combo pieces are often 3 mana, such as Rings of Brighthearth, Basalt Monolith, or even something like Fabricate).

So, thats a quick look at blue/black in edh, a fun colour combo with lots of potential! I’d love to hear about any deck builds you have in these colours, or if this article has inspired you!

But for now, thanks for reading, and it’s bye from Yami!