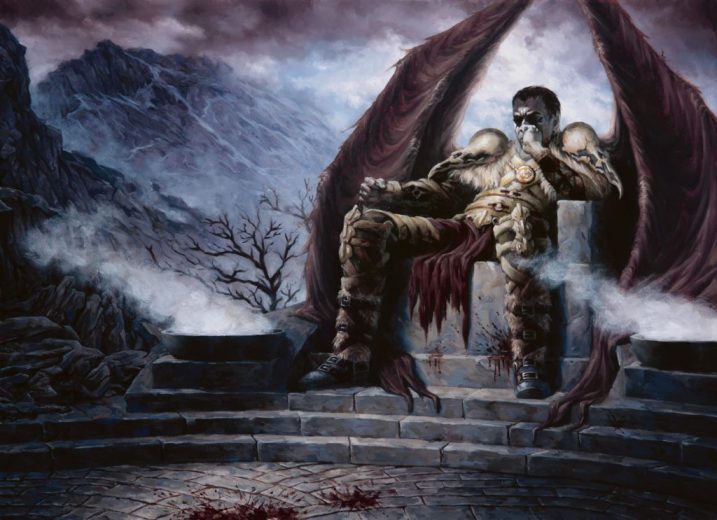 Hi all, Crazy’s here with a few firsts for No-Cash Commander.

First – This is the first no-cash commander that was spawned from a comment on our very own website! A user by the name of Kevin left a request on one of the older articles in this series asking for a classic B/W tokens build, and who are we to let him down?

Second – This is the first deck in the series that’s Orzhov-coloured, so that’s pretty nice.

There’s one more “First” in this article but I’ll leave that for later – Introducing now the man of the hour – Clocking in at $48.99, the original chair-sitter himself, Vish Kal, Blood Arbiter:

B/W tokens has a few gameplans, but we’re going with the simple one – Punch them until they’re dead. As far as unique traits for the deck there is some focus on anthems and resilience; with us being Black/White we’ve got that in spades, with Vish Kal allowing us to take advantage of that resilience by turning it into removal – as well as being a powerful flying haymaker.

We’ll start the token ball rolling with out various token producers – From the top:

Captain of the Watch – Starting with a Core Set Classic, this superwoman puts down 9/9s worth of stats with vigilance even without any incidental soldiers, which is pretty great for 6 mana.

Emeria Angel – Makes all of our land come with one free bird token as well as being a decent flyer itself.

Geist-Honored Monk – Gets bigger the bigger your board is, as well as providing some tokens to kickstart a new one if needed.

Hanweir Militia Captain // Westvale Cult Leader – Needs a certain critical mass to get good but when it does it gets pretty huge and pops out another body every turn.

Marsh Flitter – It flies and potentially gets bigger, and makes tokens either way.

Pawn of Ulamog – Makes a mana rock that gets pretty good with some anthem effects whenever it or another one of our creatures dies.

Requiem Angel – Another one that benefits from the suffering of our other creatures, this one makes spirits instead of eldrazi spawn though.

Riftmarked Knight – Might be over 4 turns, but that’s two 2/2 hasty flankers with protection from a colour each for only 3 mana, and that is value.

Sengir Autocrat – So the extra bodies aren’t amazing without anthems but they do provide us with some bodies to sacrifice to, say, our commander.

Skirsdag High Priest – As long as a creature has died, for example, to our commander, we can start pumping out some pretty intimidating creature tokens every turn.

Twilight Drover – As long as you can keep him supplied with mana he makes sure you go net positive on any creature tokens you lose, as well as being pretty beefy.

Angelic Accord – Gives us an Angel every turn we can gain four or more life. Good thing our commander is a 5/5 flying lifelinker huh?

Commander’s Authority – Makes us a creature every turn we can keep a different creature alive. It’s alright.

Curse of the Shallow Graves – Gives us, or anyone who attacks your poor victim for that matter, a zombie every turn. Hopefully with which to keep attacking that player.

Field of Souls – Pretty similar to Requiem Angel above, but with the caveat of nontoken unfortunately. Still a lot of value though.

Hidden Stockpile – Makes us a servo whenever we lose any permanent, including things like evolving wilds. Notably also provides us with a sacrifice outlet to keep the engine going.

Murder Investigation – Alternative name: “I AM FULL OF TINIER PEOPLE”. Pretty great to slap on a beefy token.

Sigil of the Empty Throne – Adds a 4/4 flyer onto every enchantment we play – And we only really need to get two before that’s some serious value.

Spirit Bonds – Lets us slap an extra token onto any other creature we play for only one more mana. It’s pretty value – And adds some extra value to our other spirit tokens.

Entreat the Angels – This sure is a win-con. Turns all of our mana production into total minus the whole two mana to start the process which will get you a hell of a lot of Angels.

Syphon Flesh – A particularly mean way to make some tokens, this puts you up 6 bodies on a 4-man table if we include the 3 bodies your opponents just lost.

Sorin, Solemn Visitor – WELL HELLO THERE. Welcome the First planewalker to feature in a no-cash commander deck! Acting as both an Anthem and a Token Generator, he stands to provide an absurd amount of value to this deck.

Seize the Soul – Kills two things and makes to spirits for 4 mana and a creature total. Me likey.

So that’s a lot of ways to make some bodies. Perhaps we should look at the various ways we’re abusing them?

Anointer Priest – Gives us some life every time we make a token. Including itself when it embalms, incidentally.

Falkenrath Noble, Zulaport Cutthroat – Not strictly just for tokens but they do synergise with big boards well, and that we do have.

Mirror Entity – A pretty big anthem effect that turns all of our creatures into massive beaters for the turn. You should be closing out games with this.

Phantom General – An anthem effect for tokens on a body with some notable tribal synergy. It’s pretty great here.

Pontiff of Blight – Another one not necessarily for tokens, but it sure does help that we have a wide board.

Intangible Virtue, Leyline of the Meek – Enchantments that provide a flat boost to our token power, both excellent cards with some not-terrible upsides individually.

Spear of Heliod – A flat anthem to all of our creatures that also serves as a deterrent to attacking us.

Vault of the Archangel – A Land? In MY Anthems section? It’s more likely than you think. Especially when it gives two very relevant keywords to our entire board.

Aside from all of the token cards, we also have a lot of other value in the deck:

Reassembling Skeleton, Sanitarium Skeleton, Tenacious Dead – The three little skeletons that just refuse to stay dead. Garners some excellent value from all of our cards that want things to die.

Harvester of Souls, Smothering Abomination, Dark Prophecy – Speaking of which, here’s three of our cards that really do want our guys to die so that we can draw more cards.

Mentor of the Meek – Another one that synergises well with the skeletons, as well as all of our cheap-ass tokens

Vulturous Aven – Sacrificing more creatures for fun and profit, in this case 2 cards for the price of one creature.

Gift of Immortality – Helps keep a key non-creature in the game for as long as we need them, such as Phantom General or Pontiff of Blight.

Phyrexian Reclamation – A reanimation spell for the value-conscious token commander, this gets us back our noncreature power plays as well.

Underworld Connections – The poor man’s Phyrexian Arena. You should probably upgrade this when you can.

Skullclamp – The ultimate tool in the box of “Sacrificing for fun and profit”, 1 mana and a human/soldier/spirit for 2 other cards is amazing.

Of course, we aren’t entirely self-centred (Despite the Orzhov colours), we do have ways of interacting with our opponent’s cards:

Ways of making them talk

Luminate Primordial – Swords to Plowshares for EVERYBODY! And the 4/7 vigilant body isn’t nothing either.

Oblivion Ring – Remove a permanent for as long as this sticks around. It’s perfectly fine.

March of Souls – Bombs the board and leaves everyone with a bunch of tokens. Which is fine if we have an Anthem effect down that makes all of ours bigger than theirs.

Condemn – Sometimes putting a creature on the bottom of an opponent’s deck can be just as good as exiling it. So I guess we’re playing this.

Mortify – Murder stapled to an Erase is pretty great, especially for only 3 mana.

Sudden Spoiling – Technically not removal but it may as well be, especially with Split Second.

Unexpectedly Absent – Repeat after me: “In response to you cracking your fetch, I…”

And to round that out, we have a bit of ramp to speed us along:

And there, boys and ghouls, is the deck. Given a bit more budget though, there’s a lot we could be doing here:

Both excellent cards in their own right, but especially so here just due to the consistency and volume with which these powerhouses can generate tokens for us – With benefits, in Elspeth’s case.

While not a token producer, recent Amonkhet token staple Anointed Procession would also be killer in this list, but didn’t quite make the cut due to its impressive $5 price tag. Nevertheless, the presence of this card makes our other generators go insane, and is too good to not use!

Excellent additions to the skeleton package and other effects that want our guys to die, Grave Pact and Dictate of Erebos ensure that it won’t just be us making a sacrifice. It also adds silly amount of value to Sidisi, turning her exploit into “Demonic Tutor. Also Diabolic Edict each other player.”

And that’s the full article. Enjoy it? Hate it? Think it should have gone a different direction? Feel free to comment below or give us a shout on Facebook – We’re Always Watching!