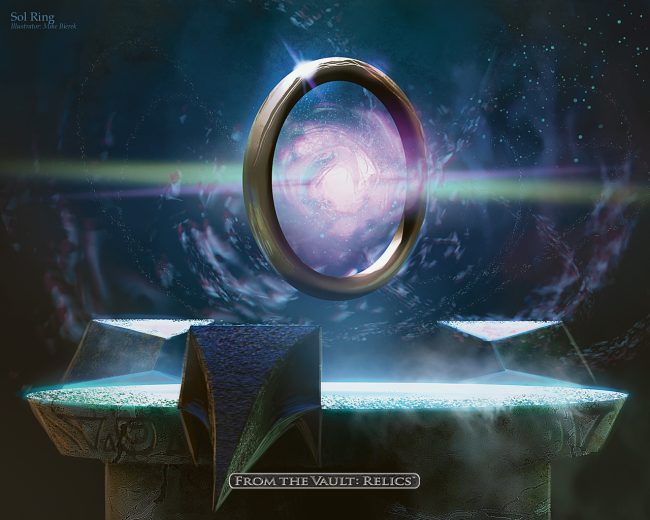 Hey everyone, Yami here, and this week I’m gonna be doing something a little different; A look at some of the more impressive mana rocks of magic, and what’s good where! 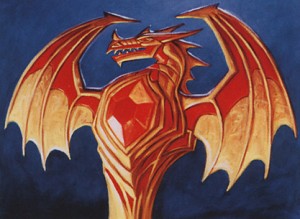 Let’s start with the ones that gave me this articles’ pun, the signet cycle!

A 10 card cycle, there is a signet for each 2-colour combination, each named after the Ravnican guilds. By paying in one mana of any colour, you can produce 2 mana, one of each colour of its respective guild (Izzet Signet makes Blue and Red, Golgari Signet makes Black and Green). This filtering is extremely useful in decks of 3 or more colours, enabling you to turn one colour into two different colours, helping to fix your colours without needing the land! In addition to this, signets only cost 2 colourless mana to cast, making them great early game fixing and ramp! I would highly recommend using appropriate coloured signets in any multi-coloured deck you own!

Keeping on Ravnica, we also have the cluestone cycle! Whilst not as good as signets in the way that they cost 3 mana, and only produce one coloured mana at a time, you can pay one of each of its two colours (Black and Blue for Dimir Cluestone), as well as sacrificing the cluestone, to draw a card! That’s effectively cycling on a mana rock, which is not bad at all! Its also worth noting that they don’t filter (like the signets), so are situationally better in that they function on their own (unlike the signets in a case where, for example, lands have been destroyed).

Finally for Ravnica, we have the keyrunes. You’ve heard of man-lands, now meet the man-rocks! Much like cluestones, keyrunes cost 3 colourless and tap for one coloured mana at a time, but instead of sacrificing to draw, you can pay mana to turn the keyrunes into creatures! This keeps them relevant late game as both attackers and blockers after you’ve already got enough mana from land!

Next up, lets look at some of the cheapest and fastest mana rocks! 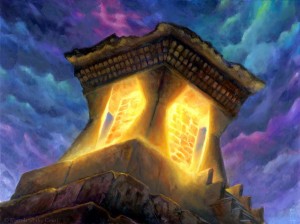 Chrome Mox is a 0 cost mana rock that simply asks you to discard a non-artifact, non-land card from your hand, and in exchange it’ll tap for the colour of that card! Perfect for ramping out turn one, or for decks with a lot of 3 drops on their curve (as this allows an easy way to make a 3 mana play on turn 3)!

Lotus Petal is another 0 cost rock, only this time you simply tap and sacrifice it to produce one mana of any colour to your pool! Once again, a rock I’d recommend for any deck that wants to get cards cast quickly! Works as a low opportunity cost addition to the storm count, and is probably best used in combo decks because of its one shot nature, but can be used by colour-intensive aggressive decks in a pinch!

Mana Crypt is one of the most well known mana rocks in magic. It’s 0 mana, so you can play it on turn one, and it taps for 2 colourless mana! That’s some incredible early ramp, and the only down side a 50% chance to take 3 damage in your upkeep! The real downside of this one is it’s cost in money… If you’re on a budget, this one might not be for you!

Mox Opal is yet another 0 cost rock that taps for one mana of any colour, only this time the clause is metalcraft; you need 3 artifacts on board to activate it’s ability! In certain decks, this is incredible (Crazy’s Kozilek deck is a prime example, though any deck that runs a critical mass of rocks like Unmistakable’s GAAIV deck can also facilitate it!) but much like Mana Crypt, it’s not a cheap card!

Mox Diamond (loving these Mox’s!) is a 0 mana cost rock that taps for any colour, and all you have to do is discard a land from your hand when it enters! Discard a basic to get a painless City of Brass? Yes please! This also pairs really well with Crucible of Worlds, as it doesn’t exile the land – allowing you to get it back afterwards!

Lion’s Eye Diamond is one that I just had to mention. This card is incredible ramp at a high cost- It costs 0 mana, and you get three mana of any one colour, but not only do you have to sacrifice it, you also have to discard your hand! In the correct circumstances, this card is incredible, and it sees a lot of play in higher budget Doomsday decks where it can be used to help you win on the spot! I personally also like the idea of it in a reanimator deck, using it to gain mana and ditch your hand to gain reanimation targets! For those of us who are into legacy though, it also sees heavy use in Storm decks for its sweet synergy with Infernal Tutor, allowing the storm player to set up another unconditional tutor (to compliment Demonic Tutor and Grim Tutor), to set up the finishing blow! Be aware that at the time of writing this article however, this is the most expensive card mentioned! 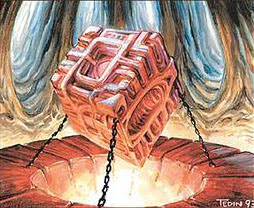 Mana Vault is a 1 cost rock, but this one taps for 3 colourless! (How much mana can we make?!) however, it doesn’t untap during your untap step! You can pay four mana during your upkeep to untap it, but you don’t have to (although it will deal 1 damage to you each turn it remains tapped). Mana vault is fantastic for ramping out a massive threat really early on!

Sol Ring. Everyone knows Sol Ring! 1 mana to make 2 mana, simple, effective, no draw backs. Everyone should be playing Sol Ring! Always a hot contender for the ban list, Sol Ring is a staple in more or less every deck (only potential exception being something like Animar in my mind), and barring a trip to the banlist will always be around for the forseeable future!

Fellwar Stone is an interesting one, as it taps for any colour and opponent’s land could tap for (barring that rare occasion where you’re against Emrakul, Ulamog and Kozilek, this will ALWAYS tap for mana)! The more varied the table is, the more use this gives you, and its only 2 mana to cast!

Mind stone is a cool rock with added utility; similar to the Cluestones, and its big brothers Hedron Archive and Dreamstone Hedron, you can pay mana, tap and sacrifice, and draw cards. This is great because early on the colourless mana helps to speed you up, but then late game when you no longer need it, you can sacrifice it to gain card advantage! This is pretty great in games that are going to last more than a few turns!

The diamond cycle (Charcoal Diamond, Fire Diamond, Marble Diamond, Moss Diamond, Sky Diamond) are cool because although they enter tapped, they each tap for a specific colour with no extra cost. This makes them particularly effective in mono-coloured decks, especially if you need a turn two play!

Talismans are a great 2 mana cycle, effectively ally coloured pain lands but in the form of mana rocks, with the cycle being made up by Talisman of Dominance, Impulse, Indulgence, Progress and Unity! 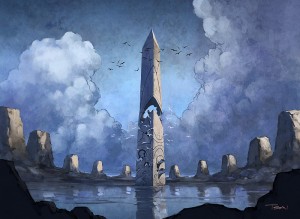 Some people might not be impressed enough with the rocks that produce colourless or just one or two colours… so how about the Alara Obelisks?! These cost 3 mana to cast, but they also tap for one of 3 colours, each one based on a shard of Alara (like Obelisk of Naya for example, that taps for Red, White or Green!) and if you like those, we also have the Banner cycle, tapping for the Khans of Tarkir tri-colour cycles, whilst also having the pay and sacrifice to draw ability, just like the cluestones! 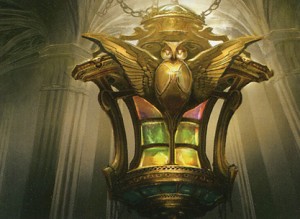 So there we have a look at some the great mana rocks of magic. There are many more mana rocks, but I spoke about them all I’d be here forever! Hopefully this article has been fun, quick, and informative, and has helped you you to maybe upgrade your decks, fix thier colours, and spee them up!

So for now, it’s bye from Yami!