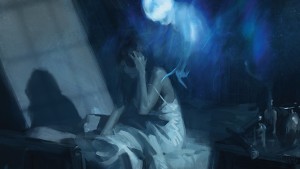 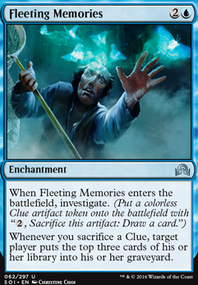 Hello and welcome back to Jank Bank, where I take a stupid concept or mediocre card, and try to make it work! Today I’m going to be tackling Fleeting Memories, A card which you may remember from way back in Shadows Over Innistrad. At first glance the card seems like a worse Sphinx Tutelage, however, the triggered ability on fleeting memories doesn’t care how the clues are sacrificed. This means that since the release of Shadows Over Innistrad this card has just been waiting for the right mass sacrifice outlet. And with Kaladesh, that wait was over. 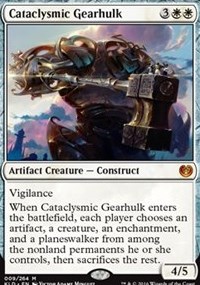 The card I’m talking about is Cataclysmic Gearhulk, the second worst gearhulk, above only the giant robot equivalent of a malformed secret brother. It’s completely failed to have any significant impact in standard, until now. It just needed the right mill shell to get going.

The main strategy with this deck is quite simple, we make a lot of clues, we play cards that provide benefits from clues being sacrificed. And then we sacrifice the clues en mass to the messenger of the gods, Cataclysmic Gearhulk for an explosive value haymaker. Cards like Tireless Tracker, Ulvenwald mysteries, and Fleeting Memories help us attack for massive damage somewhere around turn 10 – 25.

To be real for a minute, this deck isn’t meant to be taken seriously at a competitive level, it’s just a bit of a fun brew using an unusual strategy.

The Decklist can be found at Tappedout 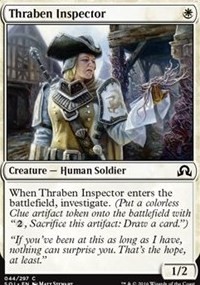 Thraben inspector – Standard staple Thraben Inspector (A.K.A Edward Spaghetti Hand) is a no brainer to include in this deck, it’s well statted for its mana cost and starts us off with an opening clue.

Erdwal Illuminator – this card is fantastic in a clue generating deck, as often you may only be generating one clue per turn erdwal illuminator effectively doubles your production speed.

Sylvan Advocate – This card just seems like a strong inclusion due to its firm yet defensive statline and it’s ability to grow bigger as the game progresses.

Fleeting Memories – The main win condition of this deck, ideally we want to have 2 or 3 down on the board before we mass sacrifice things, for maximum effect. 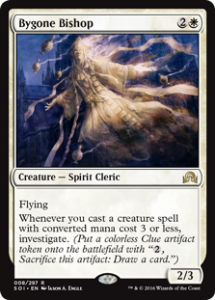 Bygone Bishop – Another good way to produce clues, as the deck consists mostly of creature cards with 3cmc or less. 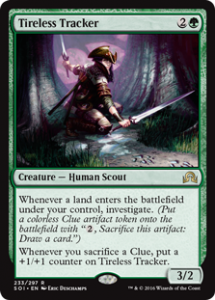 Tireless Tracker – This card is the main reason to be running Bant, it’s a clue generator that also benefits from clue sacrifice, an absolute allstar in this list. When the gearhulk drops, if you choose to keep alive your trusty tireless tracker then they will grow to humongous size, almost guaranteed to be bigger than anything your opponents will have. 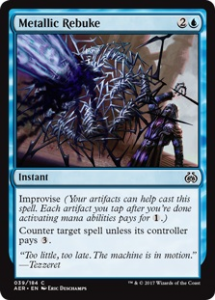 Metallic Rebuke – sometimes it’s a worse Mana Leak, most of the time it’s a better Mana Leak, more on that in “notable synergies”

Startled Awake – sometimes a mill deck just needs that final bit of reach to get the opponent down to 0 cards in their library,  and startled awake is the card for this.

Tamiyo, Field Researcher – combos really well with the vigilant creatures in this deck, she provides good card draw, and if you manage to ult her then you can focus more mana on sacrificing clues and less on casting cards

Cataclysmic Gearhulk – if this were some form of social media I would surely do the “Raised Hands” emoji. Cataclysmic gearhulk is the savior of both fleeting memories, and also my heart, The gearhulk can cripple opposing boardstates and sometimes cause a concession on cast if the opponent happened to overextend.

Turn 1 you can play a thraben inspector, and this will put online our Manaleak for turn 2, a very good opening play to make. 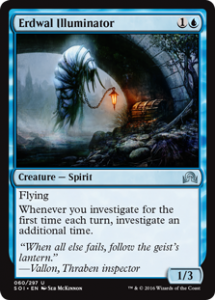 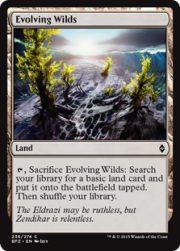 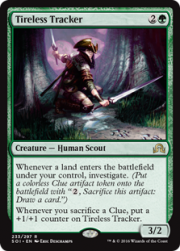 With an erdwal illuminator in play alongside a tireless tracker, we can play evolving wilds to net 2 clues, we can then crack the evolving wilds during our opponent’s turn to get another 2 clues.

Don’t be afraid to drink from the clue soup before its cooked. What I mean is, don’t be afraid to sacrifice clues before you’re ready to drop a gearhulk, we still get value out of sacrificing a clue the “normal” way. The gearhulk mainly serves as a way to sacrifice 10+ clues without having to invest a massive amount of mana.

If we’re slowly milling them then this actively helps their gameplan, against this deck you might want to hold off on playing fleeting memories until as long as possible. This has the added effect of them potentially milling themselves for more than a healthy amount

This is a pretty tough matchup for us game 1, as without the right “hate” cards or early aggressive plays it can combo off fairly easily. I’d suggest just trying your very best and believing in the heart of the cards, and the sideboarding in Negate, Authority of the Consuls, Natural Obsolescence and perhaps even a Fumigate or two.

Overall I’m pretty happy with how fun this deck turned out. On the sauces scale I would rate it around a mayonnaise, it’s creamy, white, and lots of fun on a friday night.

If anyone has any requests for me to try and take on this standard, please comment!