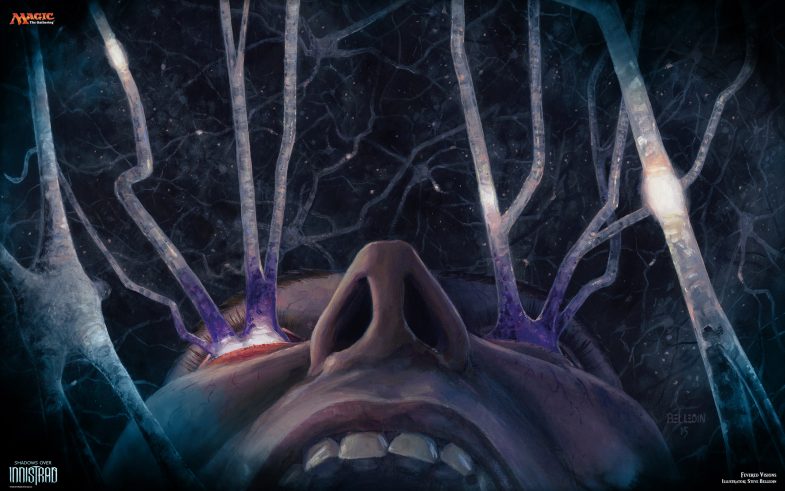 Hello everyone, since “Draw, Go” control is officially dead I decided to build a deck that is for the 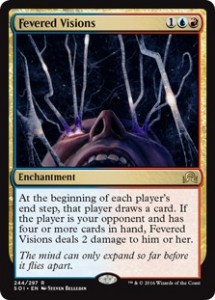 most part, draw go control. I name this masterpiece “Mono Blue Draw Go Almost Creatureless Fevered Visions Buzzword Bounce Control”. The basic idea is that you play Fevered Visions and spend the rest of the game filling up your opponent’s hand with crap, causing them to take 2 damage per turn for a slow and painful loss.

In theory that’s how it should work, however in practice this deck is fairly fragile and vulnerable to disruption, but hey that’s what sideboards are for right?

This is our win condition, without this card we can’t realistically win, the entire deck is built around digging for this card, taking advantage of its upsides, and protecting it. Dealing 2 damage per turn is fairly guaranteed, which puts our opponent on a bit of a clock. Additionally it lets us draw more answers, which is incredibly important in a mostly instant very reactive deck. 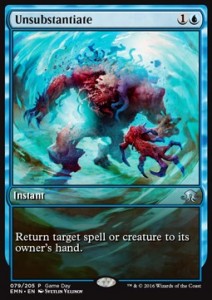 We need to work to make sure that our opponent’s spells and creatures stay in their hand, where they can’t hurt us and where they allow us to deal a constant stream of damage to the opponent.

Thing In the Ice – Notably the only creature in the deck, Thing in the Ice works with our gameplay perfectly by bouncing the entire board when it transforms, which isn’t hard to pull off in this deck. Then we can swing in for some tasty extra damage to end the game a bit quicker.

Unsubstantiate – This is a very versatile card, you can use it a standard creature bounce, or you can use it like a bad remand (wizards please reprint, blue would like some good cards). In either mode of use this card rewards us by stealing tempo from the opponent.

Engulf the Shore – this card is the entire reason we’re sticking with mono blue instead of going full izzet, the ability to bounce an entire field is very powerful, and the fact that it’s an instant speed makes this in my opinion one of the strongest cards in this deck.

Compelling deterrence – This is a fairly standard bounce spell, it’s strictly better than disperse however we don’t have any zombies in the deck to take advantage, so you could just run disperse instead.

Day’s undoing – This card is very versatile, we can use it to try and search for a fevered visions, recur our spells from the yard graveyard , and saddle the opponent with as many cards in hand as possible. 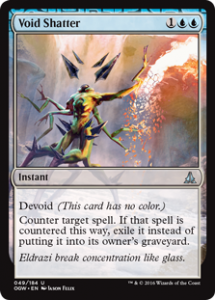 We’re playing blue, so we have counterspells, and cards that draw us more cards to get us the answers we need, there’s not really much else to it.

Negate – negate is especially useful at the moment with all of the superfriend decks floating around at the moment, in particular it allows us to deal with a turn 3 Liliana when we’re on the draw. Also Dromoka’s command, because that card really poops on this deck.

Void Shatter –  It’s a counterspell, we use it to counter spells, in particular the exile ability of the counter is relevant for when we cast day’s undoing.

Artificer’s Epiphany – Instant speed card draw is very important for a deck like this, it allows us to keep up mana for any counter’s that we may need during the opponent’s turn and the nreap the benefits at the end of the turn.

Pore over the pages – good for when we need to dig for something, and it leaves us with enough mana to cast a bounce spell or negate before our next turn, just in case. 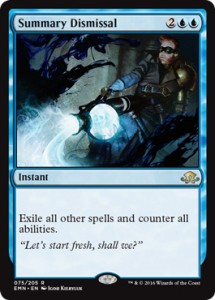 Dispel – Useful if our opponent is running CoCo or dromoka’s command, also good in the control mirror.

Displacement Wave – Displacement wave is especially useful against aggro or token strategies, with the tokens being wiped for just 2 mana.

Hydrolash –  This buys us turns and digs for answers against an aggro matchup.

Orbs of warding – The hexproof effect is good for if our opponent is running some sort of mill deck or dromoka’s command, the damage reduction is useful against token strategies where they will often have a hard time punching through.

Summary dismissal – Good against any of the titans, emerge creatures and “izzet machine gun” decks where they fill the stack up with loads of stormy effects.

Overall this deck is very fun to play if you’re a particular kind of magic player, if not then it’s not particularly fun for either side. Personally I’ve been having a blast making sure the battlefield is empty but it’s certainly not for everyone. As usual if anyone has any thoughts I’d love to hear them.

Next week I’ll be attempting to win a game with Flameshadow Conjuring, which might work. Probably not, though.