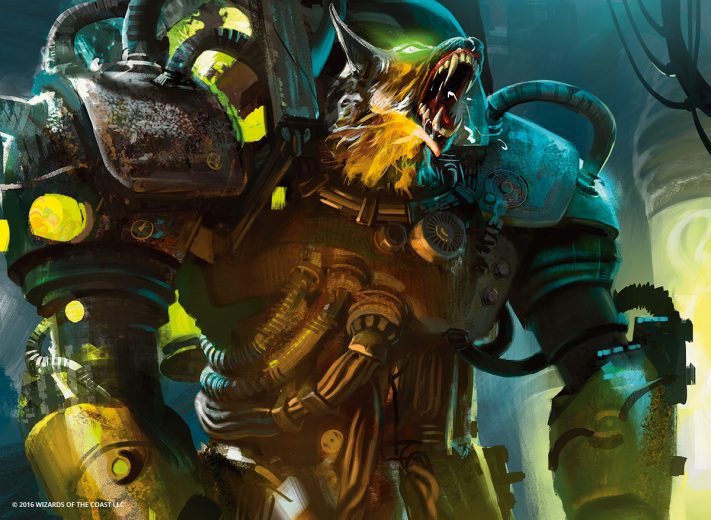 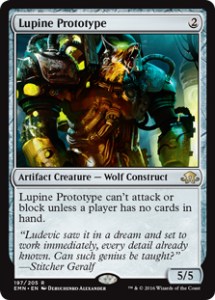 Hi again, and welcome to this week’s Jank Bank, this time I decided to tackle Lupine Prototype. It certainly seems like a powerful card at first glance, having ridiculous stats for a 2 mana creature, however, is the drawback too big to work around? Let’s find out.

The first question that comes to mind when building around Lupine prototype is “what colours do we play?”. Green and Red support aggro the best in standard right now, so it seems pretty obvious to try and build an aggressive deck in those colours, taking advantage of cards like Abbot of Kerral Keep and stromkirk occultist especially, but more on those further down.

The strategy here is to play many cards, turns those cards sideways, and get in as much damage as possible before they can stabilize, in magical Christmas land we can be pushing lethal before they get chance to drop a languish.

The whole reason for building this deck, if we can swing with him on turn 3 or 4 that’s a great advantage for us, if we can’t then he’s a waste of mana that could be put to better use, that’s why we’re trying to race to an empty hand to swing as early as possible with this bad boy. 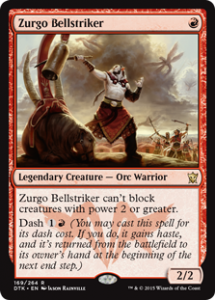 There is an absolute shitload of 1 drop creatures in this deck, 16 to be precise, this is so that we can keep up the early game pressure and also so we don’t end up with too many expensive cards in hand, delaying our Lupine Prototype. A number of these creatures also have menace, meaning that they can sneak past opposing creatures in the early game, which is very useful.

Goblin glory chaser – while admittedly often not a fantastic play after turn 1 this has the potential to be a 2/2 with menace for R, which is pretty good if we can get it renowned.

Insolent Neonate – it’s a 1/1 with menace, its pretty alright at poking through damage, and we can use his ability to cycle out lands from our hand and play more aggressively.

Kessig Prowler – a 2/1 for G, not bad, and also we can transform it later in the game if we have excess mana and no cards in hand.

Village messenger – I absolutely adore this card, it’s an ideal turn 1 play as a currently lot of decks don’t tend to play anything on their first turn, meaning that if we are on the play this is almost guaranteed to be a 2/2 with menace the following turn.

Zurgo Bellstriker – a 2/2 for 1 that can dodge sorcery speed removal, a pretty obvious choice. 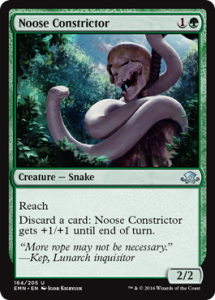 Sometimes we want to accelerate our lupine gameplan, but we have too many cards in hand, so a way to discard excess cards and also extract value from them is going to do nothing but help us.

Furyblade vampire – discarding one card to deal an extra 3 damage is pretty good, and the trample means that it won’t go to waste if you’re blocked. There’s not really much else to say here.

Noose constrictor – The lack of any sort of restriction to the discard on noose constrictor means that we can attack and defend with our lupine prototypes whenever we please, this card also puts our opponent into a very awkward spot when assigning blockers, as allowing a noose constrictor through can mean a whole load of extra damage going through. 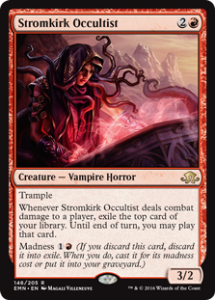 One of the main drawbacks of this deck is that we don’t want to be drawing any cards, and we’re racing to drop our hand most of the time. This means that in terms of card advantage we are completely screwed, these cards generate card advantage-ish in the sense that we can cast more spells but don’t have to have cards in hand.

Abbot of Keral Keep – Generally not a fantastic turn 2 play but after we have our lupine engine online it’s a great one-shot way of getting more bodies onto the battlefield.

Stromkirk Occultist – Really good for just continuously playing more stuff without worrying about drawing any pesky cards, the madness also works well with our discard outlets to squeeze some extra value out. 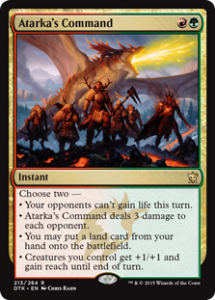 Atarka’s Command – this card is an absolute must have in building this deck, every single mode helps with our gameplan in some way, just overall really great

Reckless Bushwhacker – if we end up with a good aggressive early game Reckless bushwhacker really helps us punch in with some extra damage before turn 4, ideally on turn 3 we would play a 1 drop followed by bushwhacker, and swing in for approximately loads.

Fiery temper – good if they have a number of 2/3 creatures and you want them to die, works well with our discard outlets.

Incendiary flow – more removal, good against spell queller and the like.

Lightning Berserker – This card is fantastic if they opponent is running a more control based list, with languish especially making a comeback recently. We can dash it out, get in some nice damage, then return it to hand safe from sorcery speed wipes

Rending volley – Avacyn is still pretty popular, and Spell Queller is being used, so this is an absolutely required sideboard card for the bant matchup.

After playing this deck a fair bit in the last week, it does fairly well if you manage to keep up the pressure, while nowhere near tournament level it’s another one that may do well at FNM, certainly nobody is expecting aggro in the current meta so you can play that to your advantage. if anyone has any suggestions I’d love to hear them.