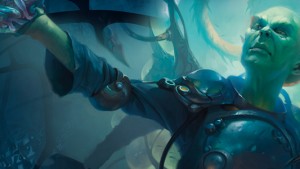 Got a couple fun announcements to make at the end of this article – Depending on when you see this article you may have already seen some of the changes – But more on that later.

In this series we’ll be talking about the releases outside of booster sets – Your Commander Precons, your large boxed sets like Planechase Anthologies (Stay tuned for that one later this year) and – like this article – From the Vaults sets.

This one in particular I’ve been looking forward to because in my mind “Lore” equals “Legendaries”. However, even though we only got three legendary creatures I was pleasantly surprised at many of the cards we got in this box. I’ll be discussing everything about the cards, from formats they’re relevant in to potential financial gain and everything in between. In alphabetical order from the top: This in my mind is an incredibly well-designed tutor card – BBB would normally be a hilariously restrictive cost but you can actually cast it for anywhere from that to B4 or even just “6”. This has always been a nice semi-budget card for the humble EDH player – being $4 for a nonfoil at time of writing – and it’s nice to get some more foils of this floating around the market. It doesn’t see much play outside of EDH but this is a From the Vaults set, what were you expecting, Legacy and Vintage staples or something? Come on… Alternatively maybe we DO get some Legacy and Vintage staples. A total mirror to Beseech, this is a card far more in demand, seeing play in Legacy and Vintage ANT and other Storm variants. It’s not an expensive card, having been a common back in Torment, but the foils command a reasonable $15 pricetag so it’s another nice shot in the market’s arm, with FTV foilings of this currently preordering at around $8/9. In commander this doesn’t see too much play though outside of Storm-esque lists. Keep an eye out for it in competitive Jeleva and Sidisi, Undead Vizier decks. Not an expensive card, or even a card that sees a massive amount of play in any format thanks to that mana cost, but a personal favourite of mine nonetheless. 8 mana in 5 colours is incredibly steep – but in a format as combo-heavy as EDH the power of tutoring 5 cards cannot be underestimated. It’ll never see play in any other format mind you or even in a reasonably high-powered EDH group – To beat the dead horse just a little more 8 mana is just too high. Foils of this were asking about $12 out of the casual market but with FTV foils already preordering at $2 I wouldn’t even expect the regular printing of this to hold it’s current value of $4. Remember that thing I said earlier about there being no Legacy or Vintage staples in these sets? Because this is a $60 card that sees play in many different decks of the format. This is mostly due to it’s interactions with Vampire Hexmage and Thespian’s Stage, being able to remove all of the counters from Dark Depths or simply become a copy of it with no counters – Which lets you get to the real prize. Surprisingly though – This is not the first time we’ve had a foil Marit Lage token. Despite this, the 20/20 flying indestructible “Definitely not an eldrazi” still looks to be commanding around $10 preorder, as well as immediate scoops from anyone who is staring it down without an answer. Finally a legendary creature! However, since this one has already been talked about in another article of ours I won’t go on about it too much. What I will say is that First Strike combined with Deathtouch makes a creature that is very difficult to kill in combat and even more difficult to survive combat with – An incredible boon when looking at her ability to recur artifacts whenever an opponent’s creature dies. Not great from a financial standpoint, the FTV foil preordering for only $1.50, this is still a good addition to the set and a recommended commander by us if you’re looking for a nice unconventional option for your artifact deck. I’ll say it: The Helvault is not a great card. A repeatable Oblivion Ring effect isn’t terrible, but paying 7 mana a time and having to tap it most certainly is. It’s even too slow to use as a combo piece, setting up for a Planar Cleansing by hiding all your creatures in the vault because it has to tap to do it. I can see why it was included as it was a key story piece but I wouldn’t write it in to the story of your deck. Ah, another legendary creature we’ve already talked about! This one considerably less though so I’ll talk about it a little. If you ever wanted to lose all your friends then Memnarch is 100% the deck to do it for you – just generate infinite coloured mana (Via Deadeye Navigator and Palinchron for example) and you can steal every permanent on the table. A foil of this did previously command about $25 but those of you who are looking to foil out your blue artifact EDH deck can rejoice as this is preordering for about $8. You know Wizards, I thought we *weren’t* doing Storm any more? but here you are printing another card that sees play in Vintage storm, and the second one with new art no less! This is certainly bringing the foil price way down too (From $17 down to about $4), so I suppose I should get used to the fact that a lot of the blue decks in my playgroup are going to be playing with a Storm sub-theme for a while. In all seriousness though this is another excellent story moment and a good way to get more copies of this card into the market without oversaturating the market with Storm staples. Oh look, ANOTHER… wait, we haven’t done this one yet? Oh.

Momir Vig is an excellent example of why certain cards have been banned from EDH in the past (Looking at you Prophet of Kruphix) because this guy basically reads “Coiling Oracle is now a Worldy Tutor that cantrips”. He’s the most expensive legendary creature on this list, clocking in at around $8 but the FTV printing is looking to make him more accessible, preordering at around $5. I may look to do a full analysis of this guy at some point in the future, perhaps in my No-Cash series. I remember the days before my group knew there was a banlist and we played this along with Oblivion Ring and good old Worldfire. Now if you want to make this work you need an Unspeakable Symbol or a Wall of Blood. In case it wasn’t clear this card doesn’t really ask a lot in the pricetag department simply for the amount of work it needs to go off in any format – With the FTV printing now preordering for an entire one dollar of your hard-earned cash. Do you play Red? Do you hate everyone? Do you want a card that communicates this effectively? Let me show you Obliterate. Now, this isn’t my favourite flavour text that’s ever been on this card but this text attaches it to the moment it was originally supposed to depict – A broken wizard destroying everything purely to spite his opponents. A bit like the guy playing this in their deck – You’d probably be looking to put this is something like a Mogis, god of Slaughter Punisher deck where after the devastation you still have a win condition on the table. Otherwise you’re just kind of mean. How convenient that this combos well with Near-Death Experience right? It combos well with a lot of other things too – don’t be fooled, this thing is a combo machine more than a creature machine. You play this in your Brion Stoutarm or Trostani deck to recoup the life immediately and then start pumping out your 30/30 or whatever ridiculous number you were at every turn. Unfortunately that’s almost all this is good for – You only really see it in “Big Token” Commander decks. Interestingly though this is, in fact, the first time you’ve been able to get this in foil – So if a proper constructed format ever were to break it it’s price could rocket from the $5 this is preordering for. The only land with Transmute in the game – And for this distinction was previously commanding about $22 a foil. The first real modern staple on this list, it sees play in Mono-U Tron and Ad Nauseam lists, usually as an alternate means to find that last Tron land or your Academy Ruins. Sees some play in EDH as well, mostly as a land tutor. FTV Lore looks to have put a dent in the price, preordering for only $11. If you’re lucky enough to already own a foil Jitte you know 2 things: First, I’m jealous. Second, it’s a $220 foil. You’ll all be pleased to know the following 2 things: First, FTV Jitte is preordering for only about $31. Second, the original printing is unaffected by this so far, breathe easy collectors. It’s easy to see why it might have that kind of value though – it sees a staggering amount of play in legacy and vintage and any edh deck with even a minor equipment subtheme wants one. Especially Dr. Jank, he recently put together a Kemba, Kha Regent list. Another card that sees fringe legacy play, this was a member of the same cycle as the legendary Force of Will, but instead of imitating Counterspell this one imitates Thoughtseize. Or I guess Thoughtseize imitates Unmask since this was in Masques block. Preordering for about $9 despite being a $40 foil originally, which makes sense considering most edh decks don’t really play targeted discard in a multiplayer format. (Edit: A reddit user has informed me that Unmask was not in fact part of the same cycle as Force of Will – Just templated very similarly.)

Overall I think this is a fine product, plenty of things for each player group to sink their teeth into, some seriously discounted foils and a wide variety of colours. As usual with From the Vault sets though expect some foil curling right out of the box and don’t spend too much on cards you aren’t going to use – but if you see it for MSRP the Depths and the Jitte more than pay for it so snap it up.

Anyway, those announcements I mentioned at the start. We now have a Facebook Page! You may have even got here via the page, in which case hello again! We plan to update this with our article postings as and when we write them and as a forum to interact with you guys! We may even do some Magic streaming or giveaways on there at some point in the future so if you want in on those then head on over and give us a like, we’d sure appreciate it. And on that facebook page will be the other new thing we have that should also be at the top of this page right now – Our new logo! We figured we should probably get one before we got any social media streams on the go. Let us know what you think of it on the new page!