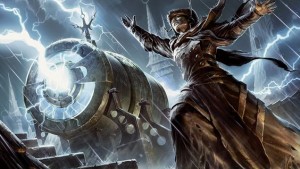 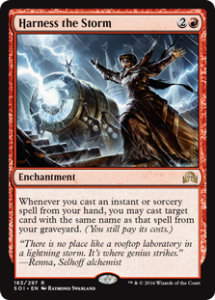 Hi there, and welcome to your weekly (hopefully!) dose of semi-playable jank. This week I attempted to create a deck utilizing Harness the storm.  it started as an optimistic 4 of, then a disappointing 3 of, a saddening 2 of, and then it was gone. There was not a single point during playtesting that I had a harness the storm in hand and wanted to cast it, I really want that card to be good but I just can’t make it work. I did, however, learn something very valuable during playtesting, Thermo-Alchemist is pretty damn good in the right deck, so I decided to expand upon that and this is the final list:

The general idea here is to get out as many Thermo-alchemist as you can, cast lots of spells, and burn them to death, it’s pretty simple really. 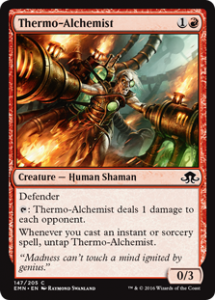 I think this card may end up being one of the most underrated and overlooked cards to come out of EMN, it turns all of your removal into burn spells, your card draw into burn spells, and your burn spells into slightly better burn spells. If you manage to get multiple copies down it gets so good so quick. It’s also a fairly good blocker in the current popular meta of 2/3 creatures. 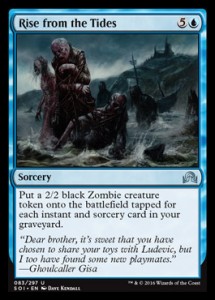 Rise from the tides

In a deck primarily built to cast lots of spells it would seem silly not to include a few copies of Rise from the tides, used in conjunction with brain in a jar you can cast this on an opponent’s end step for surprise next turn lethal. 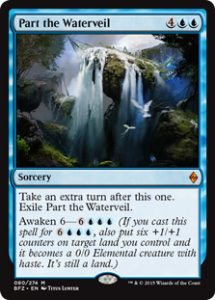 This card works well with our rise from the tides win condition, in the opponents end step we cast rise (via Brain in a jar), and if we don’t manage to swing for lethal in our next turn then we can cast Part the waterveil to swing again. 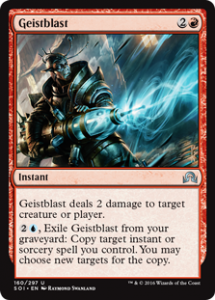 On the surface this is a horribly overcosted burn spell, however it’s the secondary ability of the card that we generally want to make use of. It’s absolutely fantastic for doubling the strength of our Rise from the tides (in an ideal world we’re getting 20-30 zombies for 4 mana here), it’s also great for if we desperately need to copy some removal or burn. 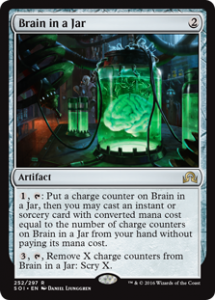 Brain in a jar

Brain in a jar is mostly going to be used for cheating out the more expensive sorceries in the deck for 1 mana and we also want to use this to cast sorceries like Take Inventory and Incendiary flow in our opponent’s turn. It’s a great big value train. 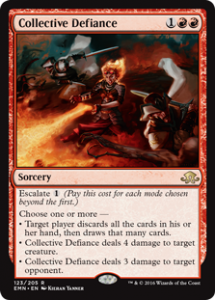 I couldn’t decide between this and Exquisite firecraft for a spot in the maindeck, collective defiance deals less damage to the face but I believe that the lower damage is completely outweighed by the versatility of the card, for example I’m seeing a few lists running thalia’s lancers to tutor up answers like dragonlord dromoka, you can wheel that answer away in addition to dealing damage to them, or maybe your current hand looks like a pile of hot garbage, suddenly you have a new hand and more spells in the yard to buff rise from the tides. It’s also noteworthy that if you cast this spell through brain in a jar or goblin dark dwellers you can still pay the escalate costs. 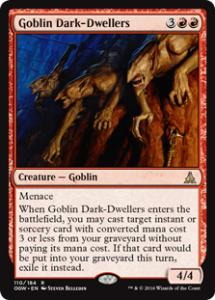 This card is just a great big ball of value, you get to cast a spell and the body is pretty good too. Generally we want to recast collective defiance with this for insane value.

Incendiary flow – Pretty good value burn spell, not much else needs to be said here.

Galvanic Bombardment – Good early game removal that transitions nicely into the mid-late game and can deal with avacyn for 1 mana.

In this section I’m going to go through the sideboard choices and when you might want to side them in.

Dispel – if the opponent is running a lot of removal we might want to add this to our deck, removal really screws over our thermo-alchemist plan. Also good for any decks we face that include counterspells.

Exquisite firecraft – This is for when we want to rush down the opponent as fast as possible ( in conjunction with goblin dark dwellers) or if we want to reliably be able to deal with an Avacyn.

Fevered visions – This is intended  for when we go up against more control oriented decks that will want to keep their hand pretty full.

Summary dismissal – This is by far my personal favourite counterspell to be released for a while. This is going to be mostly used for dealing with Eldrazi creatures with nasty on cast triggers, Like Emrakul or Elder-Deep-Fiend.

Overall I would consider this deck “mildly playable”, it’s not going to take the next GP by storm but I anticipate it doing reasonably well in the FNM environment. Maybe next time I try using Harness the storm it won’t turn into another deck entirely but let’s be honest here – that’s not happening.

Next week I’m going to be tackling the Lupine prototype deck which I look forward to greatly.

Jank on my brothers.