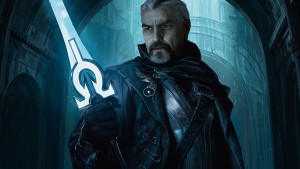 In my pool were 2 decks staring me in the face. I ended up building both since there was no overlap.

The first – a UR control/tempo list with 2 win-conditions. The main players of the deck were:

I played that for the first game of the day. I came up against the best possible Jund Pool I think could have been pulled. I killed his Turn 3 Olivia both games. Both of which were followed up by a turn 4 Arlinn Kord

Yeah. I got totally hosed in Round one, barely touched the guy around dealing with all of his threats. Very well-played game though.

After that horror-show of a game, I switched to deck number 2 after deciding that UR control was dumb. Turns out GW humans is pretty well-positioned in SoI limited – here’s the list:

Looking at it now that list looks awesome. At the time I thought this was going to be just a pile of cardboard that would tide me through to the end of the day. Hoo BOY was I wrong.

Round 2 I came up against out newest Author playing RGw Werewolves. Which frankly I was pretty impressed with in Sealed considering you’d get like 6-7 flips at most and all of his were wolf-people. Unfortunately for him I spotted my favourite thing right as we reached Board-Stall. Making a Spirit with Odric on board gives my entire field flying. 2-0 from the same thing twice.

Round 3 was short and uneventful. I honestly wish I had a better story to write here but the guy on RG Midrange got stuck at 2 lands with one playable both mercifully short games.

Round 4 I was against the guy with both the best and worst pool I can imagine. Good because 5 of his 7 rares were the new Hand-Lands so he basically got a free prerelease. Bad because between those and the “Harness the Storm” he had literally one playable rare. Which was a Relentless Dead he wasn’t playing being outside of Black – he was in fact playing every colour other than Black – he called it “4-colour mediocre-stuff”. Won one by getting Odric down with both a Flyer and a Trampler dropping Tenacity for lethal, then the other with just trample to push through the last couple points.

Final round and feeling pretty good having not lost a round since switching to this deck. Turns out I was justified because I went 2-0 in this round too! Opponent was on RB Vamps but with no really good Vampires. His removal however was insane – Burn From Within, Avacyn’s Judgment, the works. His threat assessment was a little off though, killed him mostly by stalling on the ground and continually poking him to death with a Topplegeist and and a Spirit token.

Came 4th overall which I was really pretty happy with!

Except for one crucial detail. At the shop I was at they only did prizes for top 3. Because of the number of players there were two 5-0s and a bunch of 4-1s. The person who beat me on “Opponent’s Win%” for 3rd place was our very own Unmistakable, who was the real winner of this prerelease. Having opened a foil Archangel Avacyn (at time of writing, $80) and a Descend upon the Sinful and another Thing in the Ice out of his prize packs.

All in all though, damn good day. May have to try GW Humans in constructed after that one.