So let’s talk Commander. I like Commander, probably my favourite constructed format. So it would also make sense that I quite like Legendary creatures. In this post we’re going to look at all the Legendaries in Shadows over Innistrad. 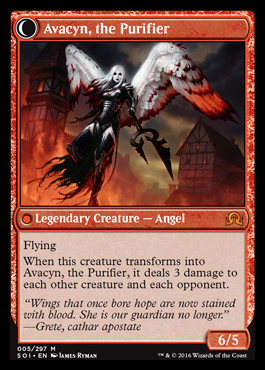 So Serra Angel got buff as hell. And then used her new powers to become the Angst-Lord of Evil. Which is actually pretty cool.

Probably not terrible – the main problem here is that her colour identity is RW, which objectively has both the least card draw and the least ramp of any 2-colour combination. On the other hand she has some REALLY good abilities. I am more than happy to have a “No boardwipe today thanks” sitting in my command zone. And then when she flips she laughs at all the other silly players who thought they were going to be on tokens this game. I think if I played her as the commander it would look like a Kalmene deck but with less focus on the commander damage and more on just making value trades with both of her abilites. Key cards would be “Destroy” Boardwipes, Damage doublers and more things to give my team indestructible.

Now this a card I would be real happy to play in most RW decks. Zurgo Helmsmasher, Aurelia and Kalemne in particular I can see loving this for the flash indestructible and boardwipe. Not sure I’d put this in Kaalia of the Vast though – The flip-splosion would kill Kaalia and she has enough trouble sticking at a good table as-is. Saying that – in almost all those decks and more I would choose the original Avacyn, Angel of Hope over this one for the extra utility that comes with permanent indestructibility on ALL permanents (Armageddon anyone?).

She’s going to be a Standard Powerhouse – there is absolutely no doubt about that. Pretty much any white deck that needs a 5-drop will be playing this. Debatable in other formats though, too expensive for Modern or Legacy and probably for Canadian Highlander too. 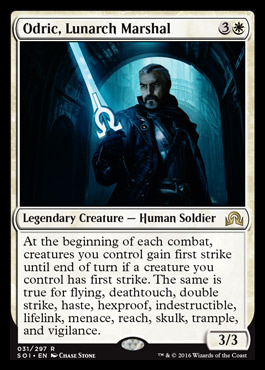 So how spicy do you like your Keyword Soup? Because Odric is serving it up hot.

Hella gimmicky. Definitely buildable though – has insane synergy with… well, keywords. Akroma, Angel of Wrath and Sword of Vengeance seem pretty insane with him among other keyword-granting equipment. The problem would be putting the creature-base together – would be a difficult toss-up between tokens to have a bunch of good keywords on small bodies or a bunch of good keywords on less bodies but bigger ones. Oddly enough the old Odric would be incredibly powerful in both of those types of deck too – all the keywords AND deciding exactly how combat works? Seems powerful.

Tough call. If you have a critical mass of relevant keywords then sure but I can’t help but feel like there’d always be a better card. Would be pretty good as part of an Akroma deck though just because of the keyword soup.

Thinking probably not. Only place I’d give it a maybe is in Standard, potentially if someone were to build WR Combat tricks and use him as Zada 5-8. Otherwise he’s just too slow and doesn’t do enough. 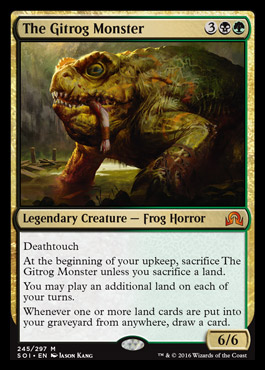 Yes. So much yes. Fills a much needed niche as a potential Dredge commander. If you mill at least one land off a dredge with this guy down you can replace the draw you would get off of Gitrog with even more dredge giving the deck the speed it desperately needs. Also happens to be BFFs with Titania, Protector of Argoth, giving you a free 5/3 each upkeep in addition to your draw/dredge. Other insane synergies include Sprouting Vines, the one unplayed Storm card, Life From the Loam, if you didn’t catch that already and Crucible of Worlds to continually re-play the lands you’re sacrificing.

Not sure I see much synergy with a lot of things – I feel like he needs too much synergy to be in many commander decks where he isn’t the commander. Saying that in a lot of decks where the graveyard synergy is already there there may be enough incidental pieces that he’ll fit – for example Tasigur or Sidisi could possibly make use of him with all the incidental land-milling that goes on in those lists, or Jarad with his own ability involving Land sacrifice.

Maybe not Standard but potentially Modern. You heard me. Modern Dredgevine lists could definitely use this as some sort of massive accelerant using the dredge/draw combo described above to dump half their library in a turn. Or it could take too much work to get online – I’m on the fence. 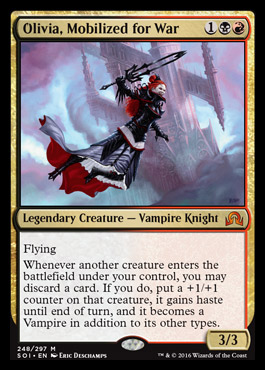 I’m sorry but how is that sword supposed to cut anything?

As a RB Vampire commander she is inevitably going to draw comparisons to the other Olivia, Olivia Voldaren.
So let’s just compare the two! Old Livvy was slightly pricier but also came with a removal engine and a temporary control engine stapled to her face – making her far better for control.  She also doesn’t have a ridiculously impractical sword. New Livvy is both cheaper and makes your other creatures more powerful, be they vamps or not. As such if you want to build RB AGGRO vamps you definitely want this lady. Just make sure you have a good reason to keep discarding cards. I hear Shadows Over Innistrad might be able to help with that.

Looking to get aggressive? Are you looking to abuse a discard outlet any? Do you like Vampires? Then yeah you should probably play this card. Seems pretty fun with either Rakdos or Malfegor with how much they seem like they’d enjoy attacking, or Nicol Bolas for the hasty “Wit’s End-on-a-stick”

Incredibly strong threat in Standard, if I were in RB Aggro I would play the hell out of this. Especially if I had down the vampire that gave all vamps madness to wombo out like 3/4 vamps at once. Living the dream. Probably not too good in many other formats – maybe in a T2 Modern deck somewhere? 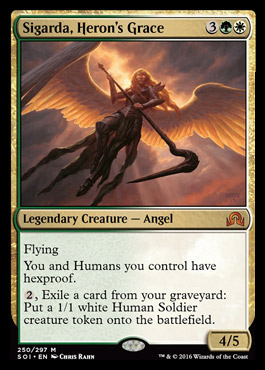 Fits a niche definitely – I was pretty shocked to realise that we didn’t actually have a good commander for GW humans yet. And giving yourself and most of your field Hexproof is never a bad thing either. Goes with all the tribal trimmings like Coat of Arms and Descendants’ Path and specific human tribal things like Champion of the Parish and the new Thalia’s Lieutenant. I also wouldn’t be averse to putting some token boosters in here like Intangible Virtue to work with her second ability. I do find it strange how little the two versions of Sigarda synergise with each other though – although I do really like the inversion of “Everything EXCEPT me is Hexproof”.

I would not have a problem putting this in any token build really – but if we had any other human synergy in the deck even better! Seems super good with Captain Sisay as a tutorable source of Hexproof for him as well. KtK Anafenza for the same.

Standard and nothing else. Too slow for every other format – honestly not sure it’ll see a huge amount of play in standard, I doubt most human tribal decks are going to go to 5 mana there either. And then add in the fact that almost any deck outside of standard, if they were going to play a Sigarda, they’d be playing the one from Original Innistrad.

In short – I am not disappointed with the legendaries in this set – they all seem like they would be pretty good in their own niche and also seem like standard powerhouses. Honestly I’m probably going to build a Gitrog deck myself because he looks hilarious – definitely my favourite legend of the set, followed shortly by Avacyn, as much as I hate her colour identity.