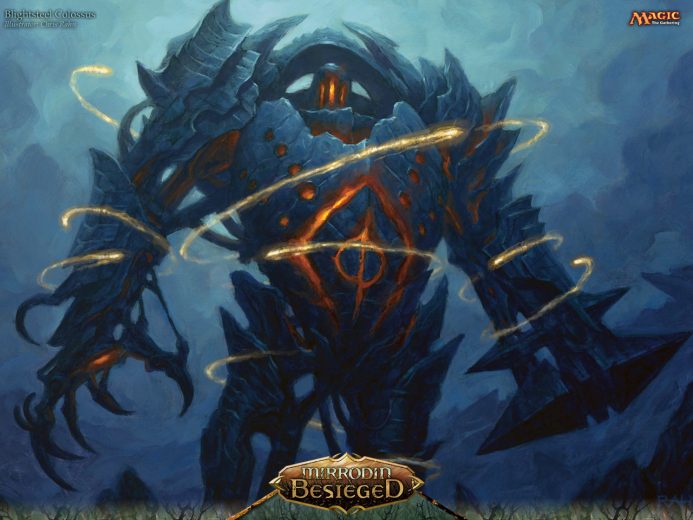 This is it – the Blog-Namer. Settle in kiddies, this one’s a doozy. Because no matter if there is ever another story about Salty players (And there will be those) this will forever be THE Rain of Salt.

“Troll” is playing his Anafenza deck, “Unmistakable” is on his new Erebos control deck, “Wallet” is playing Unmistakable’s Muzzio control and I was playing my Kozilek “Big things and Boardwipes.dek”. Up to this point in the night I had been shot, stabbed, lasered, stabbed, trampled, stabbed and stabbed again by “Troll” in almost every game so I was already kind of at wit’s end. Turn order was Me>Troll>Unmistakable>Wallet.

I was having a pretty unfortunate game – I was drawing almost entirely lands and utility with almost no creatures or actual threats. Luckily nobody else was doing much of anything either. All “Troll” had down was Anafenza, Unmistakable only had his Erebos, some small creatures and a Phyrexian Arena and Wallet had down a Spine of Ish Sah and Muzzio. My board was Loreseeker’s Stone, Eldrazi Mimic equipped with Sword of Body and Mind and some Mana Rocks – about 8 mana per turn for me.
Confession time: I am a bit of a “That Guy”. If you do something against me I will generally accept it if it’s justified. But if I feel you’re playing your card wrong I will let you know. “Troll” casts Abrupt Decay at sorcery speed targeting my Sword of Body and Mind – which in almost any other circumstance would be a pretty good target. Except that Unmistakable was currently eyeing up the Muzzio which had it’s Swiftfoot Boots on. So that got me pretty riled up. But then at the end of Unmistakable’s turn when Wallet activates Muzzio he flips over a Blightsteel Colossus.

Math time: What’s 11 Minus 1? Answer: Dead Crazy.
So of course Wallet swings it at me. Which is fair – I was the only one he could kill. My problem was that I died purely because Troll misplayed his Abrupt Decay. Unmistakable, as a joke, hands me an actual container of salt. I (jokingly) tip the sealed container over Troll’s Anafenza. What I did not realise at the time was that the lid was rather loose. Oops. I sat out for the rest of the night after that.
And that is why no matter how salty anyone gets at a game, among my playgroups there will only ever be one “Rain of Salt”.
Crazy out.
Enjoy the writing style? Hate it? Think Troll made the right play? Let me know in the comments!